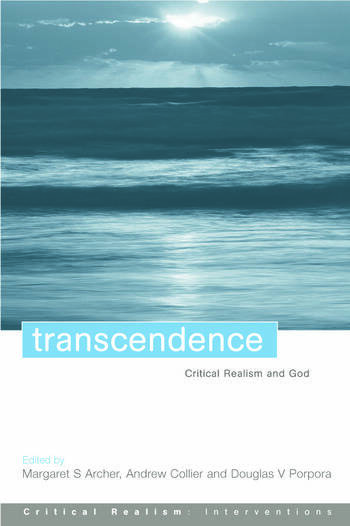 Atheism as a belief does not have to present intellectual credentials within academia. Yet to hold beliefs means giving reasons for doing so, ones which may be found wanting. Instead, atheism is the automatic default setting within the academic world.

This book explores religious experience as a justifiable reason for religious belief. It uniquely demonstrates that the three pillars of critical realism - ontological intransitivity, epistemic relativity and judgemental rationality - can be applied to religion as to any other beliefs or theories.

The three authors are critical realists by philosophical position. They seek to establish a level playing field between religion and secular ideas, which has not existed in the academic world for some generations, in order for reasoned debate to be conducted.

Margaret S Archer is Professor of Sociology at the University of Warwick, UK. Her previous books include Culture and Agency, Realist Social Theory, Being Human and Structure, Agency and the Internal Conversation.

Andrew Collier is Professor of Philosophy at the University of Southampton and has previously lectured at Warwick, Sussex and Bangor Universities. His recent publications include Being and Worth, which extends realism to ethics, and Christianity and Marxism, which aims to reconcile these two world views.