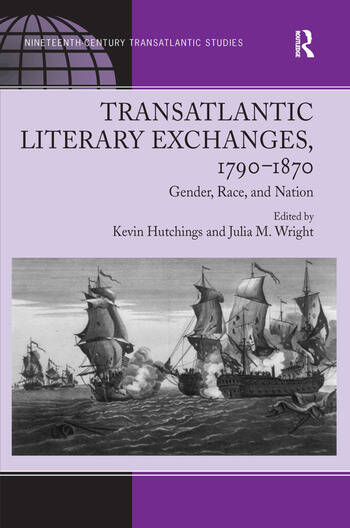 Exploring the ways in which transatlantic relationships functioned in the nineteenth century to unsettle hierarchical models of gender, race, and national and cultural differences, this collection demonstrates the generative potential of transatlantic studies to loosen demographic frames and challenge conveniently linear histories. The contributors take up a rich and varied range of topics, including Charlotte Smith's novelistic treatment of the American Revolution, The Old Manor House; Anna Jameson's counter-discursive constructions of gender in a travelogue; Felicia Hemans, Herman Melville, and the 'Queer Atlantic'; representations of indigenous religion and shamanism in British Romantic literary discourse; the mid-nineteenth-century transatlantic abolitionist movement; the transatlantic adventure novel; the exchanges of transatlantic print culture facilitated by the Minerva Press; British and Anglo-American representations of Niagara Falls; and Charles Brockden Brown's intervention in the literature of exploration. Taken together, the essays underscore the strategic power of the concept of the transatlantic to enable new perspectives on the politics of gender, race, and cultural difference as manifested in late eighteenth- and nineteenth-century Britain and North America.

'The essays in Transatlantic Literary Exchanges examine spaces where national attachments are mixed, multiple, and/or ambiguous. In focusing on such liminal spaces in an impressive range of works and authors, the collection offers many important new insights into the construction of-and contestation over-key conceptual categories, such as sexuality, nature, and genre. These insights pose profound questions about the way we approach particular authors, how we think of American and British literature in general from the late eighteenth through mid-nineteenth centuries, and, ultimately, about the stories we tell about this period in literary history.' Jim Egan, Brown University '[This book] is interdisciplinary and consistently thorough in its analyses, being concerned with transatlantic culture in all its many facets - historical, political, philosophical and theological - and the combined effect is to read the nineteenth-century Atlantic world as an imaginative space where social, economic and political exchange occurs in frequently surprising, and often destabilising, cultural forms.' Literature and History '[This book] brings together a range of topics and methodologies relevant to transatlantic studies, providing a current introduction to the field by describing ongoing trends and highlighting particular researches.' Romanticism