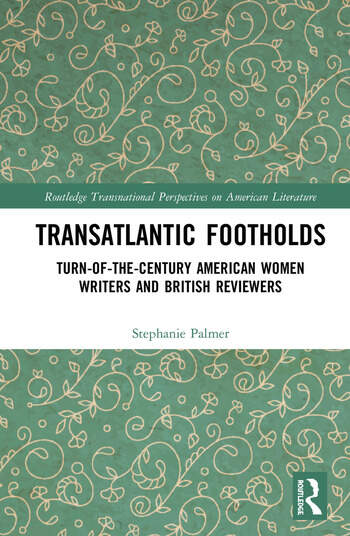 Transatlantic Footholds: Turn-of-the-Century American Women Writers and British Reviewers analyses British reviews of American women fiction writers, essayists and poets between the periods of literary domesticity and modernism. The book demonstrates that a variety of American women writers were intelligently read in Britain during this era. British reviewers read American women as literary artists, as women and as Americans. While their notion of who counted as "women" was too limited by race and class, they eagerly read these writers for insight about how women around the world were entering debates on women’s place, the class struggle, religion, Indian policy, childrearing, and high society. In the process, by reading American women in varied ways, reviewers became hybrid and dissenting readers. The taste among British reviewers for American women’s books helped change the predominant direction that high culture flowed across the Atlantic from east-to-west to west-to-east. Britons working in London or far afield were deeply invested in the idea of "America." "America," their responses prove, is a transnational construct.

3. Readings of Mary E. Wilkins Freeman in and beyond the "English Craze"

4. Eyes to See Them:British Responses to Native Americans in the Works of Helen Hunt Jackson and Zitkala-Ša

5. Touching the Chords: Charlotte Perkins Gilman and her British Fans

6. The Customs of that Other Country: Reading Edith Wharton in Britain

Stephanie Palmer is Senior Lecturer of Nineteenth Century American Literature at Nottingham Trent University in Nottingham, United Kingdom. She is the author of Together by Accident: American Local Color Literature and the Middle Class (2009) and articles in Symbiosis, Studies in Travel Writing, Women's Writing, Nineteenth-Century Literature, Arizona Quarterly, Pedagogy, and the essay collection, Transatlantic Conversations (2017).