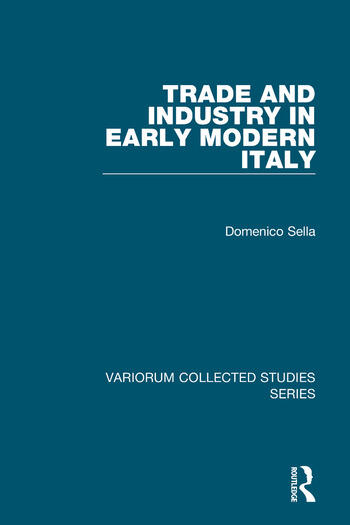 This volume brings together a set of classic essays by Domenico Sella in which he reassesses the economic fortunes of Northern Italy, in particular Lombardy and Venice, during the 16th and 17th centuries. In addition, the literature on the economics and society of northern Italy had hitherto dealt primarily with the major cities, Milan, Florence and Venice, and their celebrated manufactures, extensive commercial activities and banking. By contrast their countryside was largely neglected and its population dismissed as an undifferentiated mass of peasants fully engaged in farming. The essays in this volume represent as many soundings into this "long forgotten" rural world. As it turns out, rural communities often harbored handicraft industries, and the latter appear to have avoided the debacle that hit the urban economies and their celebrated manufactures, highly regulated as they were by the guilds, in the face of international competition.

Domenico Sella is an Emeritus Professor in the Department of History at theUniversity of Wisconsin, Madison, USA.

’... this collection of some of [Domenico Sella's] classic essays spanning nearly 50 years represents an effective panoramic view of his varied research interests, and gives the Anglophone readership a good flavour of his sophisticated revisionist views... Once again Ashgate’s Variorum series has provided its readers with a collection of undisputable value [...] both for research and teaching purposes.’ Economic History Review '...the lasting appeal of this collection is the strength of his argument that is woven throughout the essays. Each new idea or assertion...is backed up by a multitude of complex quantitative evidence that begs for close examination and consideration...Sella has left no archive unturned.' Sixteenth Century Journal