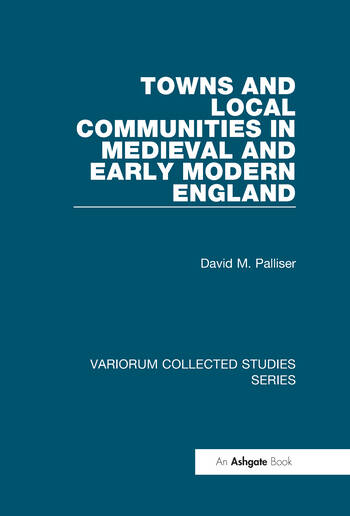 Towns and Local Communities in Medieval and Early Modern England

Professor Palliser focuses here on towns in England in the centuries between the Norman Conquest and the Tudor period, on which he is an acknowledged authority. Urban topography, archaeology, economy, society and politics are all brought under review, and particular attention is given to relationships between towns and the Crown, to the evidence for migration into towns, and to the vexed question of urban fortunes in the 15th and 16th centuries. Two essays set urban history in a broader framework by considering recent work on town and village formation and on the development of parishes. The collection includes two hitherto unpublished studies and is introduced and put in context by a new survey of English towns from the 7th to the 16th centuries.

Contents: Preface; Introduction: the origins and growth of English towns. Local Communities: Town and village formation in medieval England; The English parish in perspective. Archaeology and Topography: The archaeology of British towns 1066-1530; Town defences in medieval England and Wales. Towns and Power: Towns and the English state, 1066-1500; Towns and the Crown in England: the counties and the county towns. Late Medieval Society: The role of minorities and immigrants in English medieval towns; Urban society; Civic mentality and the environment in Tudor York; A regional capital as magnet: immigrants to York, 1477-1566. Urban Decline?: A crisis in English towns? The case of York, 1460-1640; Urban decay revisited. Index.

David M. Palliser is Emeritus Professor of Medieval History at the University of Leeds, UK.

'All in all, this book confirms Palliser's position as our major urban historian in the pre-industrial period... Both he and his publishers are to be congratulated.' Economic History Review '... the essays gathered here provide a model of how urban history should be written.' Urban History ’Overall [...], this collection is well worth seeking out for anyone, specialist and non-specialist alike, with an interest in pre-modern urban history.’ Local Population Studies ’As a collection, the papers showcase a mastery of topographical and archaeological as well as documentary material; the net result is that, while the accent is firmly on urban history, there is more than enough to appeal to those interested in the broader evolution of townscapes... In summary, this excellent volume stands as an essential point of reference for scholars interested in all aspects of medieval urbanism.’ Landscape History ’[The papers] are smoothly written, highly readable, and reflect the author's profound understanding of town history and his insistence on urban continuities. This collection thus presents a distinguished contribution to regional history, effectively set in a wider context.’ Northern History ’This book brings together a very important collection of studies in urban history, ranging across political, social, economic and cultural aspects, and over the medieval and early modern periods... These essays show some of the many contributions that David Palliser has made towards our understanding of that importance.’ The Local Historian ’Anyone who wishes to explore the medieval and early modern urban environment will find Towns and Local Communities very useful. Palliser effectively presents historiography, theories, and arguments in myriad branches of urban studies... This collection of Palliser's work provides a thorough and understandable overview of medieval English urban history.’ Sixteenth Century Journal ’Almost every aspect of medieval urban

Towns and Local Communities in Medieval and Early Modern England