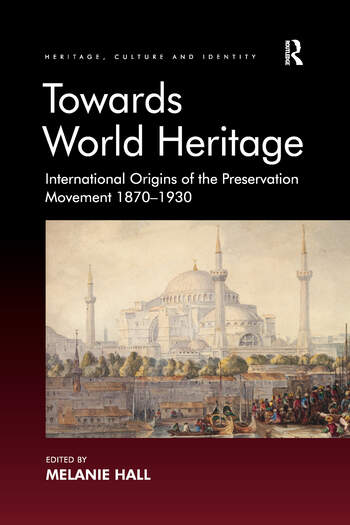 Towards World Heritage: International Origins of the Preservation Movement 1870-1930

Historic preservation, whether of landscapes or buildings, was an important development of the nineteenth century in many countries. There is however surprisingly little understanding about how it took place, and research into it is narrowly focused. For example, generally landscape preservation from this time is examined separately from buildings; preservation is seen in terms of national narratives, or considered within the contexts of area studies, and it is usually seen from a specific disciplinary perspective. All of these later categorizations did not apply at the time and consequently, a very partial view is achieved. In order to begin unlocking a very complex phenomenon that has helped to define our own age, this dynamic collection of essays brings together an international and transdisciplinary line-up of academics and practitioners to reconsider preservation's origins in the second half of the nineteenth and early part of the twentieth century. With a focus on Britain and the British Empire, and including case studies from the United States, Canada, Sweden, France, Germany, Sri Lanka, 'The Holy Land', and Turkey, this book places preservation in imperial, international, and national contexts, demonstrating that there was far more interaction between different countries in this arena than may be supposed and revealing remarkable but hitherto hidden overlaps and intersections. It examines three main themes: the influence of religion; the political and sub-diplomatic aspects of preservation; and the professionalization of preservation practice. Internationalizing trends already existed through the churches, the universities, and the diplomatic services, as well as familial ties that had an important impact on preservation's epistemic communities and its targets. Other internationalizing factors include an interest in national histories and the histories of architecture and art, particularly when known through illustration; a growing interest in biography especially of 'founding fathers' or famous literary figures; and tourism. Although the focus is on architectural preservation, this book demonstrates that, in this formative period, the preservation of buildings and landscapes needs to be considered together - as it often was at the time - and in context. The conclusion reached is that the preservation movement has to be understood in imperial and international contexts, rather than in simply national or regional ones.

Contents: Foreword: facing the past, Charles Dellheim; Introduction: towards world heritage, Melanie Hall; Part I Case Studies: Niagara Falls: preservation and the spectacle of Anglo-American accord, Melanie Hall; Redeeming holy wisdom: Britain and St Sophia, Erik Goldstein; Early preservation efforts in Sri Lanka: William H. Gregory at Anuradhapura and Kandy, Anne M. Blackburn; Conflict and neglect: between ruin and preservation at the Church of the Nativity, Bethlehem, Raymond Cohen; 'The shrine at Sulgrave': the preservation of the Washington ancestral home as an 'English Mount Vernon' and transatlantic relations, T.G. Otte. Part II Framing the Practice: The law's delay? Preservation legislation in France, Germany and England, 1870-1914, Astrid Swenson; Heritage and its communities: reflections on the English experience in the 19th and 20th centuries, Chris Miele; America's early historic preservation movement (1850-1930) in a transatlantic context, Michael Holleran; Conservation and the professions: the Swedish context 1880-1920, Ola Wetterberg; Rethinking the 'powers of darkness': an anti-history of the preservation movement in Britain, Peter Mandler; Bibliography; Index.

'Towards World Heritage brings together some of the best minds in historic preservation and offers a series of outstanding essays on the early history of the movement in a transnational perspective. Steering clear of the twin shoals of aestheticism and triumphalism, the essays in this volume recognize that preservation debates are always suffused with politics. Towards World Heritage is an invaluable volume for scholars and practitioners alike.' Max Page, University of Massachusetts Amherst, USA 'Overall, this book is an interesting volume, which sheds light on the neglected study of the initial phase of international preservation efforts of world heritage and the related politics on the local and global scales.' Journal of Heritage Tourism '... as an innovative survey of international attitudes at a crucial time for the emergence of national approaches to cultural protection, this book has much to offer.' Landscapes 'Towards World Heritage is a collection of ten pieces, most of them probing new territory, to reveal how complex and multifaceted that early history is. As a collection, these essays make a very useful contribution to our still limited knowledge of preservation’s own past. For American readers, the book merits attention foremost for the issues that are analyzed'. Richard Longstreth,The Public Historian '... a work which advances the study of international heritage and conservation, and which demonstrates how we need to be aware of the international themes and links in the history of heritage'. English Heritage Historical Review '... well-produced and nicely illustrated ... the collection’s purpose is to explore, through thematically linked case studies, the political, intellectual and cultural contexts of the rise of a significant interest in ’international heritage’ in the half-century or so from the late nineteenth century'. Journal of Transatlantic Studies

Towards World Heritage: International Origins of the Preservation Movement 1870-1930