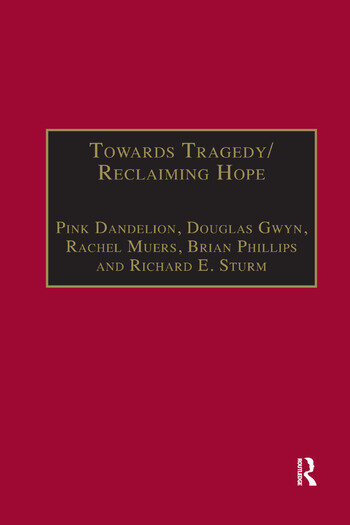 Towards Tragedy/Reclaiming Hope: Literature, Theology and Sociology in Conversation

The 'death of tragedy' in the modern era has been proposed and debated in recent years, largely in terms of literature and western culture in general. Today, any catastrophe or misadventure is likely to be labeled a 'tragedy', without any inference of a larger, transcendent horizon or providential design that the word once conveyed. This book offers new perspectives on the idea of the 'death of tragedy', taking England and the Religious Society of Friends (Quakers) in particular as a case study. Chapters focus on the origins of tragedy in ancient Greece, gospel and tragedy, the beginnings of the Quaker movement in seventeenth-century England, apocalyptic versus secularized experiences of time, Edwardian Quaker triumphalism, the search for English identity in postcolonial Britain, liberal Quakerism at the end of the twentieth century, and the promise and dilemma of postmodernity. The different disciplinary perspectives of the contributing authors bring literature, history, theology and sociology into a creative and revealing conversation. A Foreword by Richard Fenn introduces the book with an original and provocative meditation on tragedy and time.

'This book, with its unique approach and distinctive multi-disciplinary appeal, is insightful and thought-provoking. It will attract a broad range of readers and is recommended to all those interested in understanding and reflecting on the past, the present, and the future.' Journal of Contemporary Religion 'This is the kind of book that students should read as they set about those long established courses on theodicy.' Theology '... a fascinating, cross-disciplinary application of the concept of tragedy to Quaker history and the recent history of England... clear and helpful introduction... One remarkable feature of this book is the way it maintains continuity throughout its sections despite multiple authors... the book does offer a compelling and unified vision of how we might use the lens of tragedy to understand more richly various epochs in Quaker and English history. And in so doing, it returns us to considerations of how we ought to live. What more important task could there be?' Friends Journal

Towards Tragedy/Reclaiming Hope: Literature, Theology and Sociology in Conversation