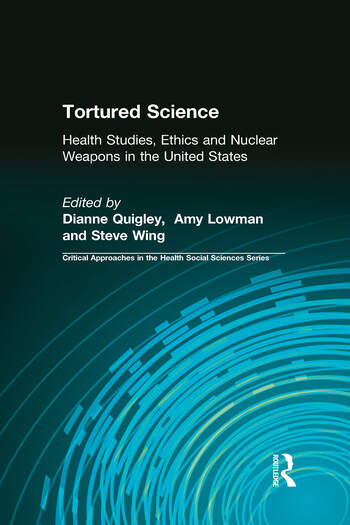 The U.S.A. s nuclear weapons program has exposed workers and the public to health hazards since World War II. In the 1980s and 1990s, federal health agencies responded to new revelations about these hazards by pouring millions of dollars into research on the health impacts of radiation. In Tortured Science: Health Studies, Ethics and Nuclear Weapons in the United States , community health activists and researchers reflect on the research program for addressing the health effects of nuclear weapons production at Hanford, WA, Rocky Flats, CO, Livermore Labs, CA, and Fernald, OH. The authors describe conflicts of interest, data suppression, technical inadequacies, and other examples of how researchers failed in their social responsibility to the affected human populations. The research program s health studies did not lead to any meaningful follow-up on the major health concerns of community members, nor have they helped communities seek reparations for high radiation exposures that may have contributed to thyroid, bone, lung and other diseases. In Tortured Science , several ethicists review these health research problems. Research ethics as a discipline seeks to protect individuals and groups, obtain approval from affected communities, mitigate potential research harms, and guard against vigilance, scientific contrivance, denial, and suppression of findings. Such protections were not adequately provided in the research program on the health effects of nuclear weapons production, as critiqued in the ethical reviews. This book compels us to develop a new ethical framework for scientific research on military-industrial and other sources of contamination. Intended Audience: Public health professionals; graduates/undergraduates in public health, community health, environmental studies, epidemiology, medical anthropology, public sociology, ethics/religious studies, and science policy; government health researchers at federal health agencies, centres for ethics and bioethics (private/academic), and community health organisations; community-based researchers and environmental organisations; nuclear weapons and peace organisations.

CHAPTER 4
Democracy and Public Health at Rocky Flats: The Examples of Edward A. Martell and Carl J. Johnson
LeRoy Moore

CHAPTER 8
Investigation of an Excess of Malignant Melanoma among Employees of the Lawrence Livermore National Laboratory
Donald F. Austin