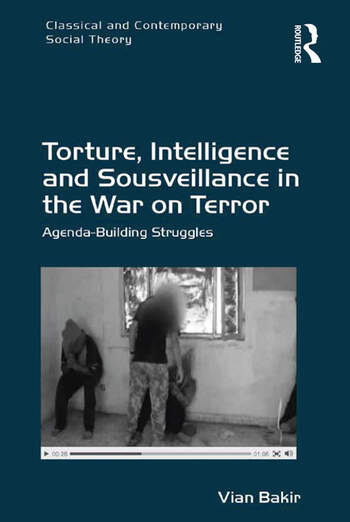 Torture, Intelligence and Sousveillance in the War on Terror: Agenda-Building Struggles

Torture, Intelligence and Sousveillance in the War on Terror examines the communication battles of the Bush and Blair political administrations (and those of their successors in America and Britain) over their use of torture, first-hand or second-hand, to gain intelligence for the War on Terror. Exploring key agenda-building drivers that exposed the torture-intelligence nexus and presenting detailed case studies of key media events from the UK and USA, this insightful volume exposes dominant political discourses on the torture-for-intelligence policy. Whether in the form of unauthorized leaks, official investigations, investigative journalism, real-time reporting, or Non-Governmental Organisation activity, this timely study evaluates various modes of resistance to governments’ attempts at strategic political communication, with particular attention to ’sousveillance’: community-based recording from first-person perspectives. A rigorous exposition of the power-knowledge relationships constituting the torture-intelligence nexus, which re-evaluates agenda-building models in the digital age and assesses the strength of the public sphere across the Third, Fourth and Fifth Estates, Torture, Intelligence and Sousveillance in the War on Terror will appeal to scholars across the social sciences with interests in media and communication, sociology and social theory, politics and political communication, international relations, and journalism.

Vian Bakir is Senior Lecturer in Journalism at Bangor University, Wales, UK. She is co-editor of Communication in the Age of Suspicion: Trust and the Media and is author of Sousveillance, Media and Strategic Political Communication: Iraq, USA, UK.

’The US-defined war on terror� has shaped international and intercultural relations in the past decade. This essential and engaging book examines a hitherto ignored aspect of this global and open-ended war: namely the nexus between media and intelligence services and between terror and torture in democratic societies. Highly recommended.’ Daya Thussu, University of Westminster, UK 'In this innovative and insightful exploration of the crucial agenda-setting battles over torture during the "war on terror", Vian Bakir shows the different ways in which battles between "strategic political communication" and citizen "sousveillance" have played out in key American and British cases. A sophisticated contribution to the literature.' Martin Shaw, Institut Barcelona d'Estudis Internacionals, Spain, University of Roehampton, UK and Emeritus Professor University of Sussex, UK 'This well-written book ... is a significant contribution to the literature offering an innovative overview of the issues, theories and themes that constitute the study and practice of torture-intelligence by linking them coherently.' Political Studies Review

Torture, Intelligence and Sousveillance in the War on Terror: Agenda-Building Struggles