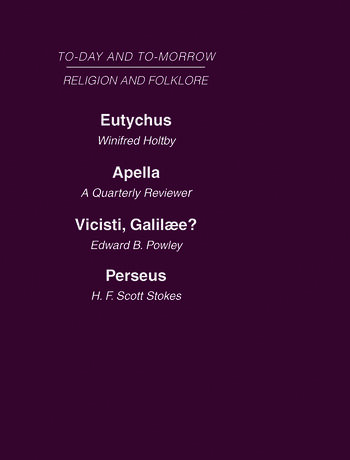 Or the Future of the Pulpit

"Few wittier or wiser books have appeared in this stimulating series." Spectator

A dialogue between Archbishop Fénelon, who stands for the great ecclesiastical tradition of preaching, Anthony, who stands for the more superficial intellectual movements in England and Eutychus, the ordinary man, investigates the nature of the pulpit.

Apella or the Future of the Jews

"Cogent, because of brevity and magnificent prose style…It should not be missed." Spectator

"…his arguments are a provocation to fruitful thinking." Morning Post

This volume attempts to foresee the future of the Jews across the world, in the light of their previous history, the situation in Russia and the modern developments of Zionism. Inter-marriage, Jewish nationalism, Jewish religion and reform movements are among the subjects discussed.

Or Religion in England: A Survey and a Forecast

"…a book to be read, thought over, and discussed by all Christians who are not afraid to take the shutters down." Guardian

Who was Jesus? How did Christianity begin, become orthodox, receive recognition as the state religion of the Roman Empire? What has been the history of Christianity in England? This volume discusses these questions and surveys of state of English churches in the early 20th century.

This volume gives an account of the dragon in history: in ancient Greece, in early Christendom and in modern Europe and explains how the dragon-story originated from the myths and customs of pre-historic Egypt. The author then maintains that in twentieth century England the dragon is not dead, that the characteristics of respectability, bigotry and cant represent the modern day dragon.

Today and Tomorrow Volume 17 Religion and Folklore includes Eutychus, Or the Future of the Pulpit by Winifred Holtby, Apella or the Future of the Jews by A Quarterly Reviewer, Vicisti, Galilaee?Or Religion in England: A Survey and a Forecast by Edward B Powley, Perseus, of Dragons by H F Scott Stokes. 438pp