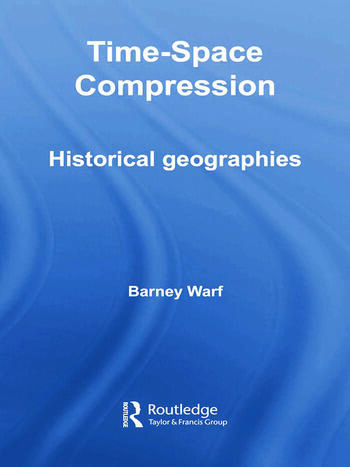 If geography is the study of how human beings are stretched over the earth’s surface, a vital part of that process is how we know and feel about space and time. Although space and time appear as "natural" and outside of society, they are in fact social constructions; every society develops different ways of measuring, organizing, and perceiving them. Given steady increases in the volume and velocity of social transactions over space, time and space have steadily "shrunk" via the process of time-space compression. By changing the time-space prisms of daily life – how people use their times and spaces, the opportunities and constraints they face, the meanings they attach to them – time-space compression is simultaneously cultural, social, political, and psychological in nature.

This book explores how various social institutions and technologies historically generated enormous improvements in transportation and communications that produced transformative reductions in the time and cost of interactions among places, creating ever-changing geographies of centrality and peripherality. Warf invokes a global perspective on early modern, late modern, and postmodern capitalism. He makes use of data concerning travel times at various historical junctures, maps of distances between places at different historical moments, anecdotal analyses based on published accounts of people’s sense of place, examinations of cultural forms that represented space (e.g., paintings), and quotes about the culture of speed.

Warf shows how time-space compression varies under different historical and geographical conditions, indicating that it is not one, single, homogenous process but a complex, contingent, and contested one. This book will be useful book for those studying and researching Geography, History, Sociology, and Political Science, as well as Anthropology, and Philosophy.

Barney Warf is Professor of Geography at Florida State University. His research and teaching interests lie within the broad domain of human geography, particularly economic and political issues, ranging from contemporary political economy and social theory to traditional quantitative, empirical approaches. He has authored, co-authored or co-edited six books, 25 book chapters, and 80 journal articles, and won teaching and research awards.