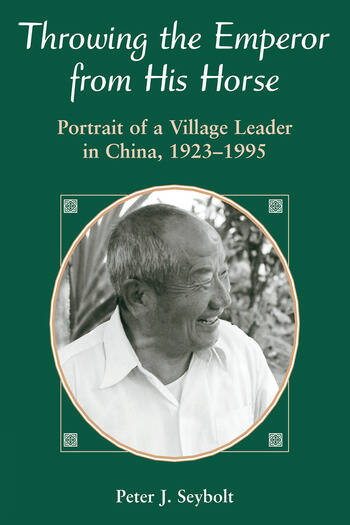 Throwing The Emperor From His Horse: Portrait Of A Village Leader In China, 1923-1995

This engaging book sketches an intimate portrait of the life of Wang Fucheng, an illiterate peasant who served for thirty years as Communist party secretary of an impoverished village on the north China plain. Based on conversations over a seven-year period (1987?1994), between Wang Fucheng and Peter Seybolt the book unfolds as a continuous first-person narrative, framed by the author's overview and chapter introductions.Born in 1923, Wang Fucheng rose under the Communists from extreme poverty to a position of power and prestige in his village. His account provides a fascinating illustration of the process of social mobility during the Maoist era, the interaction between central and local leaders, and the way central policies were adapted at the village level. The book's compelling and evocative picture of life in rural China will appeal to scholars, students, and general readers alike.

List of Illustrations, Preface, Acknowledgments, Notes on Weights and Measures, Introduction: Houhua Village in Space and Time, Poverty, Bandits, and Japanese Invaders: Early Life, 1923-1946, Return to Houhua Village: Land Reform and Establishing a Family, 1946-1953, “We Will Have a Bright Future”: The Cooperative Movement and Joining the Communist Party, 1954-1957, “This Is Not the Way to Do Farm Work”: The “Great Leap Forward,” 1958-1960, “Five Winds,” “Three Togethers,” “Four Cleanups,” and Other Campaigns, 1961-1965, “At the Risk of Death, Dare to Throw the Emperor from His Horse”: The “Great Proletarian Cultural Revolution,” 1966-1976, Houhua Village After Mao: Prosperity and Future Prospects, 1977-1990, Retirement and Retrospective on Leadership, Houhua Village Under New Leadership, 1984-1990, Facing an Uncertain Future: Houhua Village, 1994, Notes, About the Book and Author

Peter J . Seybolt is professor of history and director of the Asian Studies Program at the University of Vermont.

Throwing The Emperor From His Horse: Portrait Of A Village Leader In China, 1923-1995