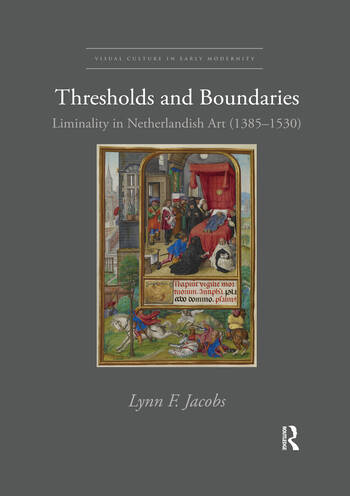 Although liminality has been studied by scholars of medieval and seventeenth-century art, the role of the threshold motif in Netherlandish art of the late fourteenth, fifteenth and early sixteenth centuries -- this late medieval/early ‘early modern’ period -- has been much less fully investigated.  Thresholds and Boundaries: Liminality in Netherlandish Art (1385-1550) addresses this issue through a focus on key case studies (Sluter's portal of the Chartreuse de Champmol and the calendar pages of the Limbourg Brothers' Très Riches Heures), and on important formats (altarpieces and illuminated manuscripts).  Lynn F. Jacobs examines how the visual thresholds established within Netherlandish paintings, sculptures, and manuscript illuminations become sites where artists could address relations between life and death, aristocrat and peasant, holy and profane, and man and God—and where artists could exploit the "betwixt and between" nature of the threshold to communicate, paradoxically, both connections and divisions between these different states and different worlds. Building on literary and anthropological interpretations of liminality, this book demonstrates how the exploration of boundaries in Netherlandish art infused the works with greater meaning.  The book's probing of the -- often ignored --meanings of the threshold motif casts new light on key works of Netherlandish art.

2. The Threshold of Death: Sluter’s Portal of the Chartreuse de Champmol

3. The Boundary of Class: The Calendar of the Très Riches Heures

4. The Thresholds of Manuscript Illuminations

5. The Thresholds of Altarpieces