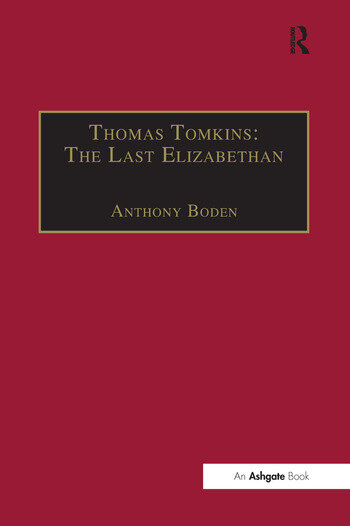 Thomas Tomkins (1572-1656), a major figure of the Golden Age of British music, was arguably the greatest of all Welsh-born composers. Living through one of the most revolutionary periods in British history, his professional life was spent in the service of the Crown and the Church at both the Chapel Royal and Worcester Cathedral. Surviving the Civil War, the suppression of the music of the English Church, the closure of the Chapel Royal, the destruction of his organ at Worcester and the devastation of the city, Tomkins was able to find the strength and inspiration to continue composing secular music of fine quality. Much of Tomkins's output has survived, including his collection of music for the Anglican rite, Musica Deo Sacra, published posthumously in 1668. His work embraced both sacred and secular vocal music, pieces for keyboard and for viol consort, thereby proving him to be one of the most versatile figures of English Renaissance music. The first part of the book provides an absorbing biography of Tomkins, setting his life into fascinating historical context. The second and third parts include major essays on Tomkins by Denis Stevens, Bernard Rose, Peter James and David Evans, all authorities on the music of the period with each providing perceptive insights into Tomkins's music. The result is a successful piece of collective work that properly places Tomkins and his achievements in his time and enables readers to reassess him properly in relation to his elders and contemporaries. Tomkins has still not reached the 'household name' status of his great teacher, William Byrd, or of his close friend and colleague, Orlando Gibbons, but he is undoubtedly worthy of much greater recognition. The book complements the increasing number of live performances and recordings of Tomkins's music, both sacred and secular, and such a comprehensive account of the man and his work should appeal to early music scholars, performers and music lovers alike.

'... (Steven's) survey of so large a repertoire in so short a space (70 pages) is brilliant.' Early Music Review 'The first part of this book provides an absorbing biography of Tomkins, setting his life into fascinating historical context. The second and third parts include major essays on Tomkins by Denis Stevens, Bernard Rose, Peter James and David Evans. The result is a successful piece of collective work that properly places Tomkins and his achievements in his time and enables readers to reassess him properly in relation to his elders and contemporaries.' British Music Society '... magnificiently research... a beautifully produced and sympathetic book, chock-full of fascinating material, shrewd analysis, and intriguing surmise. The layout is superb, with beautifully reproduced illustrations. Heartily recommended.' Church Times '... fascinating biography... Boden's history alone makes a very good read... The period of tomkins' life covers the most turbulent era in English history which serves as a dramatic background to a mere story of one musician's life. Boden tells the tale with some excitement and drama.' The Delian 'All in all, [...] devotees of Tomkins have been well served by Anthony Boden's book, and he is to be congratulated for his determination and industry as author, editor and compiler' Early Music '... the first new full-length biography of the composer in almost half a century...Using an impressive range of archival documents and early modern publications in a wide range of fields, Boden establishes Tomkins as a member of the growing and increasingly respectable class of educated artisans during the golden age of English literature and drama, and provides a fascinating glimpse into late sixteenth- and early seventeenth-century English choral establishments of the sort in which he, his father, and three half-brothers spent their lives...this is a very useful and engaging book for scholars of early modern England and for general readers with