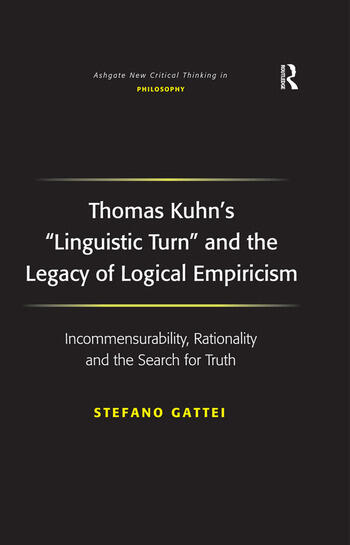 Thomas Kuhn's 'Linguistic Turn' and the Legacy of Logical Empiricism: Incommensurability, Rationality and the Search for Truth

Presenting a critical history of the philosophy of science in the twentieth century, focusing on the transition from logical positivism in its first half to the "new philosophy of science" in its second, Stefano Gattei examines the influence of several key figures, but the main focus of the book are Thomas Kuhn and Karl Popper. Kuhn as the central figure of the new philosophy of science, and Popper as a key philosopher of the time who stands outside both traditions. Gattei makes two important claims about the development of the philosophy of science in the twentieth century; that Kuhn is much closer to positivism than many have supposed, failing to solve the crisis of neopostivism, and that Popper, in responding to the deeper crisis of foundationalism that spans the whole of the Western philosophical tradition, ultimately shows what is untenable in Kuhn's view. Gattei has written a very detailed and fine grained, yet accessible discussion making exceptionally interesting use of archive materials.

Stefano Gattei researches the history and philosophy of science at the University of Pisa. He is the author of several books and articles, including La rivoluzione incompiuta di Thomas Kuhn (Turin: UTET, 2007), Introduzione a Popper (Rome-Bari: Laterza, 2008) and Karl Popper's Philosophy of Science: Rationality without Foundations (Routledge, New York). He is currently working on a reader's guide to Popper's The Logic of Scientific Discovery for Continuum Press, New York, and, together with Joseph Agassi, he is editing Physics and Philosophy, the fourth volume of Feyerabend's philosophical papers for Cambridge University Press. He also has in preparation an annotated critical edition of Kepler's Strena seu De nive sexangula (1611).

’This book is written by a philosopher who understands the issues and the nuances of key ideas, and who has also taken time to engage with the material from an historical perspective... All in all an insightful read for anyone interested in the question of incommensurability.’ Metapsychology ’... Gattei has written a book that sets a standard on scholarship on Kuhn’s work.’ Philosophy in Review 'Thomas Kuhn's 'Linguistic Turn' and the Legacy of Logical Empiricism, which stems from Gattei’s doctoral dissertation, will be of wider interest to historians with a side interest in the philosophy of science itself or in one strand of the intellectual response to science and culture in the tumultuous twentieth century - and to anyone seeking an answer to the question ’Whatever happened to Thomas Kuhn?’.' ISIS

Thomas Kuhn's 'Linguistic Turn' and the Legacy of Logical Empiricism: Incommensurability, Rationality and the Search for Truth