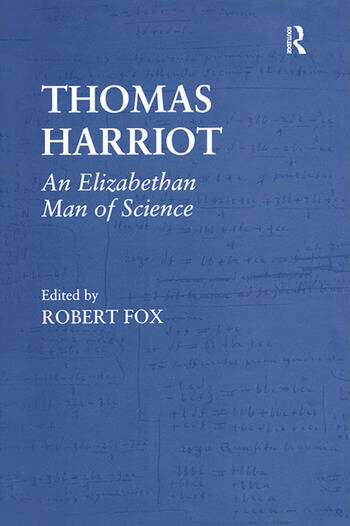 This volume assembles ten studies of the life and work of Thomas Harriot (1560-1621). These are based on lectures that have been given annually at Oriel College, Oxford since 1990, by such authorities as Hugh Trevor Roper, David Quinn and John D. North. An astronomer and mathematician whose activities embraced not only science but also philosophical debate and an engagement in the early exploration of America, Harriot occupied a prominent place in intellectual and public life. He was well read in the contemporary literature of science, and his writings on algebra, his correspondence, and his early observations with the telescope, undertaken at the same time as Galileo’s, brought him to the attention of leading men of science both in Britain and abroad. Recent scholarship has enhanced historians’ appreciation of Harriot’s achievements and of the scientific context and social milieu in which he worked, a milieu distinguished by his friendship with Walter Ralegh and the Ninth Earl of Northumberland (the ’Wizard Earl’ whose association with the Gunpowder Plot led to many years of imprisonment in the Tower). The contributions to Thomas Harriot. An Elizabethan man of science shed new light on all the main aspects of Harriot’s life and stand as an important contribution to the re-evaluation of one of the most gifted and intriguing figures in early modern British science.

’This is an excellent collection. Perhaps the bringing together of these assessments of this undoubtedly great figure in the history of science will prove the turning point in Harriot studies.’ British Journal for the History of Science ’...the essays collected in this volume provide an excellent overview of an enigmatic figure.’ Sixteenth Century Journal 'This volume...will be welcomed by anyone interested in Harriot and his world....(the essays) make definite contributions to our knowledge of Harriot's milieu - the ideas and people he encountered...' ISIS ’This volume is a work of the highest scholarly standard, yet each of the essays is beautifully written and easily accessible to the non-specialist. It brings to life not only Harriot himself, but also the world in which he lived.’ Astronomy Now