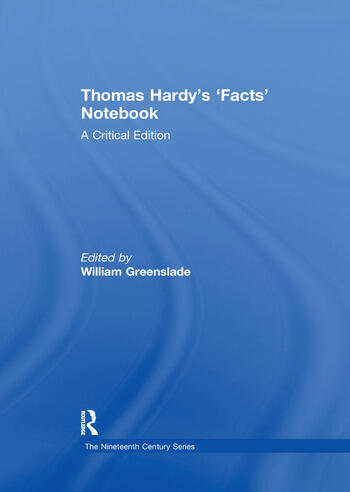 Within weeks of Thomas Hardy’s return to his native Dorchester in June 1883, he began to compile his ’Facts’ notebook, which he kept up throughout the years when he was writing some of his major work - The Mayor of Casterbridge, The Woodlanders, Tess of the d’Urbervilles and Jude the Obscure. From his intensive study of the Dorset County Chronicle for 1826-1830, he noted and summarised into 'Facts' (with the help of his first wife, Emma) hundreds of reports, many of them suggestive 'satires of circumstance', for possible use in his fiction and poems. Along with extensive reading in memoirs and local histories, this immersion in the files of the old newspaper involved him in a wider experience - the recovery and recognition of the unstable culture of the local past in the post-Napoleonic war years before his birth in 1840, and before the impact of the modernising of the Victorian era. 'Facts' is thus a unique document amongst Hardy's private writings and is here for the first time edited, the text transcribed in 'typographical facsimile' form, together with substantial annotation of the entries and critical and textual introductions.

William Greenslade is Principal Lecturer in English, University of the West of England, Bristol. He is the author of Degeneration, Culture and the Novel 1880-1940 (1994). He has edited George Gissing's The Whirlpool (1997) and has published a number of articles on late nineteenth- and early twentieth-century British literature and culture.

'... perceptively introduced and meticulously edited and annotated... It's a portrait of a great writer at work, selecting, shaping and picking up fresh ideas...' The Guardian 'This book will be indispensable to Hardy scholars; the editor has done an excellent job, the notes are helpful and exhaustive. But I don't believe you need to be a Hardy buff to value it. Well-indexed, it is a ragbag which many interested in that period and in the West of England will enjoy rummaging through.' The Spectator 'Ashgate deserve praise for seeing this unique document amongst Hardy's private writings into print...' Dorset Magazine 'The so-called 'Facts' Notebook is the last of the twelve to be edited, and it is fascinating... William Greenslade's handsome edition of Thomas Hardy's 'Facts' Notebook...Hardy's novels are sometimes characterized as gloomy or sensational, but his 'Facts' Notebook portrays a more violent, desperate society by far than he would have been permitted to describe in his fiction.' TLS 'Hardy scholars will value the publication of this notebook...this volume marks a decisive change in the direction of Hardy's writings in the early l880s...Highly recommended...' Choice '... a fascinating book...' The Use of English 'Between them, William Greenslade and Ashgate have done an excellent job of presentation... The editorial procedures and principles of annotation are logical, clearly explained, and consistently applied; there is an excellent critical introduction... Both editor and press are to be congratulated for the service they have performed for Hardy studies in making this essential document available in such a visually pleasing and authoritative form.' ELT 'The painstaking labour that such an exemplary scholarly edition necessitates can easily be overlooked: the end product has an easy, organic feel... Greenslade also provides an exceptionally detailed and usable index... The 'Facts' notebook provides an expertly contextualized, fascinating, and telling