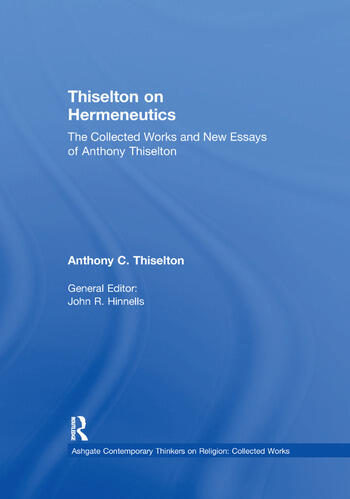 Thiselton on Hermeneutics: The Collected Works and New Essays of Anthony Thiselton

Hermeneutics is an interdisciplinary study of how we interpret texts, especially biblical texts, in the light of theories of understanding in philosophy, meaning in literary theory, and of theology. This volume brings together the seminal thought of a leading contemporary pioneer in this field. Thiselton's The Two Horizons was a classic on how horizons of biblical texts engage creatively with the horizons of the modern world. The author's later New Horizons in Hermeneutics explored still more deeply the transforming capacities of biblical texts, while his massive commentary on 1 Corinthians interpreted an epistle. This volume collects many of Anthony Thiselton's more notable writings from some seven books and 70 articles, to which he adds his own re-appraisals of earlier work. It uniquely expounds the thought of a major contemporary British theologian through his own words, and includes his own critical assessments.

Contents: Preface. Part I Situating the Subject: Situating the explorations: 'thirty years of hermeneutics'; Situating a theoretical framework: 'biblical studies and theoretical hermeneutics'; Re-situating hermeneutics in the 21st century: a programmatic re-appraisal today. Part II Hermeneutics and Speech-Act Theory: An application and caveat: 'the supposed power of words in the biblical writings'; Speech-act theory as one tool among many: 'transforming texts'; Changing the world: illocutions and 'directions of fit'; 'Christological texts in Paul'; More on Christology: 'Christology in Luke, speech act theory, and the problem of dualism in Christology'; More on promising: 'the paradigm of promise as trustworthy, temporal, transformative, speech-acts'; Retrospective re-appraisal of work on speech-act theory. Part III Hermeneutics, Semantics, and Conceptual Grammar: Justification by grace as legal fiction? 'Language-games and 'seeing as': a fresh approach to justification by faith in Paul and James'; Descriptive, evaluative, and persuasive meanings: 'the Meaning of Sarx in 1 Corinthians 5.5: a fresh approach in the light of logical and semantic factors'; 'Faith', 'flesh', and 'truth' as context-dependent concepts: 'language-games and polymorphous concepts'; Semantics serving hermeneutics: 'semantics and New Testament interpretation'; Does the Bible call all Cretans liars? 'The logical role of the liar paradox in Titus 1:12,13: a dissent from the commentaries in the light of philosophical and logical analysis'; Retrospective re-appraisal: conceptual grammar and interdisciplinary research. Part IV Lexicography, Exegesis, and Reception History: Greek lexicography and context of argument: 'the 'interpretation' of tongues? A new suggestion in the light of Greek usage in Philo and Josephus'; Does lexicographical research yield 'Hebrew' and 'Greek' concepts of truth? How does this relate to notions of truth today?; Reception history or Wirkungsgeschichte? 'The Holy Spirit in

'Professor Thiselton's writings bridge three disciplines which are usually kept apart by artificial barriers: Biblical Studies, Philosophical and Systematic Theology. There are few scholars anywhere in the world who can do this with comparable skill, insight, and clarity of thought. These masterly essays are accessible to a wide range of readers.' Graham N. Stanton, University of Cambridge, UK 'Anthony Thiselton is one of the most influential thinkers in the field of biblical hermeneutics. Over the last four decades he has consistently anchored and sustained reflection on the central questions, and a summation of his major essays will be invaluable to all who seek to understand the discipline today.' David Jeffrey, Baylor University, USA 'Ashgate are performing a great service in bringing Professor Thiselton's writings together in this imaginative and accessible way. Anthony Thiselton occupies a unique place in contemporary theology through his work in merging the horizons of philosophical hermeneutics and theological interpretation.' Colin Brown, Fuller Theological Seminary, USA 'Anthony Thiselton presents the harvest of a lifetime of labour in biblical, systematic and philosophical theology. Written with characteristic erudition, courtesy and Christian wisdom, the writings assembled here are the work of a theological master. Few can approach his command of such a range of disciplines or his commitment to disciplined thought in the light of Christian truth.' Canon Professor John Webster, University of Aberdeen, UK 'Thiselton is one of very best in the field of biblical interpretation, hermeneutical theory, and related theological and philosophical issues. This is both an introduction to his work and a comprehensive survey of it, with the added bonus of his own up to date retrospective reflections. Very rarely has anyone who has gone so thoroughly into the theoretical hermeneutical issues also done so much fine and detailed biblical interpretation. His commentary on 1 Corinthians is one of the great achievements in recent biblical scholarship, and here we have extracts from it set alongside the relevant theoretical discussions.' David F. Ford, University of Cambridge, UK 'In his many writings Anthony Thiselton has made a major contribution to British theology, especially in the way he has introduced the problems of hermeneutics into the theological debate in Britain. A collection like this provides a welcome survey of his wide ranging contributions to theological scholarship.' Professor Vincent Brummer, Emeritus Professor of Philosophy of Religion, University of Utrecht, The Netherlands 'Anthony Thiselton is one of our leading theologians, equally at home in both New Testament studies and in philosophical and theological hermeneutics, and a collection of his major articles will be widely and warmly welcomed. He works across an astonishing range of topics, bringing profound reflection to bear on disputed issues and often moving the discussion to a higher level at which disputes turn out to be resolvable.' Professor John Barton, Oriel and Lang Professor of the Interpretation of Holy Scripture, University of Oxford, UK 'Thiselton's contribution to the intersection of hermeneutical theory and the practice of biblical interpretation is unmatched in recent times. This collection of his writings will prove an invaluable tool for those with an interest in either or both of the two foci of his work.' Merold Westphal, Fordham University, USA 'One of our most distinguished and trusted voices in the arena of biblical studies and hermeneutics, Tony Thiselton has drawn together work spanning a long, fruitful and impressive career. Because these contributions have appeared in such diverse and far-long places, this collected work is especially welcome.' Joel B. Green, Dean of the School of Theology, Asbury Theological Seminary, USA 'Anthony C. Thiselton combines analytical craftsmanship, a profound knowledge of contemporary (also Continental) hermeneutics and outstanding New Testament scholarship. His constructive work in systematic theology and theological hermeneutics is among the most exciting in contemporary theology.' Marcel Sarot, Faculteit Godgeleerdheid, Utrecht, the Netherlands 'Professor Thiselton has a grasp of the philosophical and hermeneutical debate as it bears upon the biblical texts which few if any can rival. His Two Horizons and New Horizons are a mine of valuable description and critique which anyone hoping to engage seriously with contemporary issues in interpretation simply cannot ignore. Many of his essays and book chapters have provided incisive and influential contributions to specific debates. Ashgate is to be congratulated in providing this collection, in effect the best of Anthony Thiselton, which will be eagerly sought out by his many admirers.' James D.G. Dunn, Durham, UK 'Of a consistently high scholarly standard, these essays by Tony

Thiselton on Hermeneutics: The Collected Works and New Essays of Anthony Thiselton