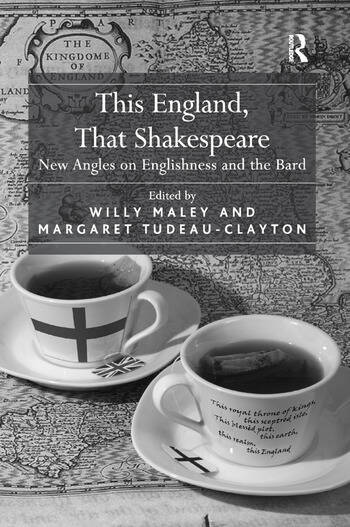 This England, That Shakespeare: New Angles on Englishness and the Bard

Is Shakespeare English, British, neither or both? Addressing from various angles the relation of the figure of the national poet/dramatist to constructions of England and Englishness this collection of essays probes the complex issues raised by this question, first through explorations of his plays, principally though not exclusively the histories (Part One), then through discussion of a range of subsequent appropriations and reorientations of Shakespeare and 'his' England (Part Two). If Shakespeare has been taken to stand for Britain as well as England, as if the two were interchangeable, this double identity has come under increasing strain with the break-up - or shake-up - of Britain through devolution and the end of Empire. Essays in Part One examine how the fissure between English and British identities is probed in Shakespeare's own work, which straddles a vital juncture when an England newly independent from Rome was negotiating its place as part of an emerging British state and empire. Essays in Part Two then explore the vexed relations of 'Shakespeare' to constructions of authorial identity as well as national, class, gender and ethnic identities. At this crucial historical moment, between the restless interrogations of the tercentenary celebrations of the Union of Scotland and England in 2007 and the quatercentenary celebrations of the death of the bard in 2016, amid an increasing clamour for a separate English parliament, when the end of Britain is being foretold and when flags and feelings are running high, this collection has a topicality that makes it of interest not only to students and scholars of Shakespeare studies and Renaissance literature, but to readers inside and outside the academy interested in the drama of national identities in a time of transition.

Willy Maley is Professor of Renaissance Studies at the University of Glasgow. He is editor, with Philip Schwyzer, of Shakespeare and Wales: From the Marches to the Assembly (Ashgate, 2010). Margaret Tudeau-Clayton is Professor of English and Head of Department at the University of NeuchÃ¢tel, Switzerland; she is author of Jonson, Shakespeare and Early Modern Virgil (1998; pbk 2006)

This England, That Shakespeare: New Angles on Englishness and the Bard