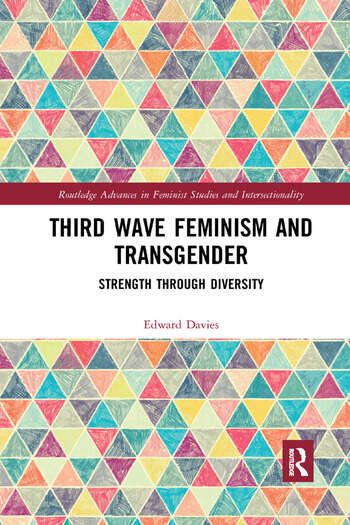 considers what positive outcomes on society in general, and the law as it pertains to gender in particular, may emerge from the identification of and cooperation between third wave feminism and transgender. Challenging the ‘internecine exclusion’ between and within each faction, Davies shows that queer-inspired philosophical third wave feminism promises to be an inclusive social discourse providing a substantial challenge to mutual exclusion. Indeed, this book explores the span of maternal relations, including womanism, ethics of care and semiotic language and subsequently reveals how gender variant people can highlight the gendered operation of conventional ethics.

With a focus on Carol Gilligan and Julia Kristeva as key instigators of a philosophical third wave of feminism, this enlightening monograph will appeal to students and postdoctoral researchers interested in fields such as women’s studies, transgender studies and gender law.

1.1 Investigating Connections: Potential for a Coalition *

1.2 Building Connections: How to Form a Coalition *

2.2 Infantilisation and the ‘Refusal to Grow Up’ *

2.3 Which Trans Identities are Real? *

4.2 Any Gender You Want as Long as it’s Heteronormative *

5.1 Ethical Framework: Setting up and Maintaining the Transstudy *

5.4 Semanalysis Deriving from the Semiotic *

5.6 Creation of the Reconstructing Discourses *

6.1 Which Gender Variant Subjectivities are Real? *

6.4 Identity as a Process: Subjectivity *

CHAPTER 7: Closed and Static Texts to Open and Evolving Narratives – Articulation and Openness *

CHAPTER 8: Exclusion to Inclusion – Postdifference for ‘Others’ *

CHAPTER 9: Recommendations – Ghosts in the Machine *

9.4 Practical Applications of the Recommendations *