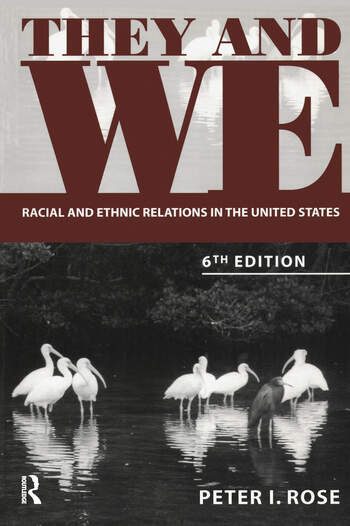 They and We: Racial and Ethnic Relations in the United States

Since its release shortly after the famous March on Washington in 1963, They and We has been a leading text in the field of racial and ethnic relations in the United States. The tradition continues. They and We, 6th edition, presented in the form of twelve linked essays plus an epilogue, offers a jargon-free introduction to the critical study of America's people, their origins and encounters. In addition to a four chapter section devoted to the social history of our diverse population, the author examines the roots of prejudice, patterns of discrimination, the meaning of "minority status," and the issues of power, politics, and pluralism. Particular attention is paid to continuing struggles for group rights among those most beleaguered, reactions to the dramatic increases in immigration from Asia and Latin America and the resurgence of nativism among those who once again feel threatened by "alien" forces, recent political crises such as occurred in the aftermath of the attack on the World Trade Towers and the Pentagon on September 11, 2001, and the war and occupation in Iraq, and continuing debates over multiculturalism. Every chapter has been updated and, where appropriate, changed or added to in light of new challenges and new perspectives. Those familiar with this sociological classic will be pleased to note that Peter Rose's approach to this subject continues to be grounded in his sensitive and engaging approach to the consideration and assessment of troubling issues. Others will come to appreciate this orientation. And all will benefit from the explication of key concepts, the clarity of exposition, and the comprehensiveness of coverage - from the observations of the French visitor Alexis de Tocqueville to contemporary Critical Race Theorists -- in what is still a rather small book.

Preface xi Part I Contexts and Concepts 1. Race, Ethnicity, and the Sociological Perspective 2. Constructions of Reality Part II Encounters 3. Natives, Settlers, and Slaves 4. From Immigrants to Ethnics 5. From Other Shores 6. The Dilemmas of Part III Attitudes, Actions, and Minority Reactions 7. The Nature of Prejudice 8. Patterns of Discrimination 9. In the Minority Part IV Power, Politics, and Pluralism 10. Pride and Protest 11. Social Physics 12. The Meanings of Multiculturalism Epilogue Index About the Author

They and We: Racial and Ethnic Relations in the United States