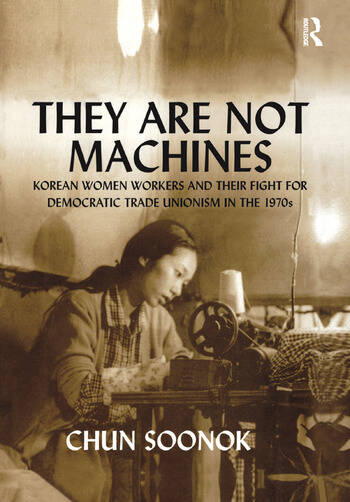 They Are Not Machines: Korean Women Workers and their Fight for Democratic Trade Unionism in the 1970s

The multi-faceted tensions created in developing countries between a burgeoning popular desire for democracy and the harsh imperatives of modernisation and industrialisation are nowhere more evident than in the so-called 'Asian tiger' nations. Of all those nascent economies, South Korea in the 1960s and 1970s stands pre-eminent for the magnitude and speed of its development and the extraordinarily oppressive and inhumane conditions that its labour force, mainly women and young girls, were compelled to endure. The author of this book was one of those young girls who suffered in the warren of sweat-shop garment factories in the slums of central Seoul. With little or no support from male co-workers, and despite their political naivety and the traditionally subordinate status of Korean females, the women textile and garment workers confronted the ruling authority at all levels. The author's mother was one of their leaders, and her eldest brother sacrificed his life for their cause. Despite appalling state-directed violence, betrayal by erstwhile colleagues, the chicanery and mendacity of employers' cooperatives and countless other setbacks, these uneducated and overworked women finally succeeded in forming the first fully democratic trade union in the history of Korea. Based on compelling personal accounts this is the first published account of the women's struggle, and it throws much light on the process of modernisation and industrialisation in Korea and beyond.

Chun Soonok, born in 1954, is related to two major figures within the history of the labour movement in South Korea. Her brother, Chun Tae-il, poured petrol over himself in November 1970, sacrificing his life to draw attention to the inhumane treatment of Korea's garment workers. His last words were 'They are not machines'. This deed galvanised grass-roots opposition to the officially-sanctioned organization of labour and led to a new order in Korean industrial relations. Her mother, Yi So-sun, now in her 70s, has dedicated her life to the cause of human rights and democratic trade unionism and continues to play a leading role in representing the interests of workers. Chun Soonok began work in a sweat-shop garment factory in Seoul at the age of 16. Dismissed from several jobs for her trade union activities, she became involved in running a wide variety of welfare projects for workers in need. From the late 1980s she lectured on union affairs and women's issues in countries around the world. In 1989 she came to the UK to embark on a programme of study that culminated in the award of a PhD in 2001. She has been Visiting Fellow at the Cardiff University and is now research professor at Sungkonghoe University, Seoul, South Korea.

Prize: 2005, runner-up, Best Sociology of Labour Book Award 2005, Labour and Labour Movements Section of the American Sociological Association ’...the contemporary South Korean labor movement has so far received scant attention from scholarly communities outside Korea...They Are Not Machines: Korean Women Workers and their Fight for Democratic Trade Unionism in the 1970s is a great addition to this tiny literature...a rare book...the most valuable part of the book is the detailed biographical account of Yi So-sun, the mother of all the workers�...the story of this woman is utterly dramatic and deeply moving.’ Journal of Asian Studies ’The book is based on compelling and evocative accounts by the participants. It is woven together by the author in a way that captures both the wider picture of the political and economic events that underwrote the so-called economic miracle, as well as the very personal sufferings that enabled this miracle to occur. The book traces out the costs and the dilemmas that faced the leading participants, as well as the ordinary women who continued to labour in the sweatshops. This book is a powerful and compelling statement about industrialisation in the Asian region and it should have a broad audience.’ Professor Peter Fairbrother, Cardiff University, UK ’Chun’s book is a fascinating and worthy account of the often forgotten face of Korea’s economic miracle.’ Asia Pacific Business Review ’...this remarkable book...received a well-deserved honourable mention from the American Sociological Association section on labour and the labour movement as one of the best books in 2005 written about labour...Chun not only uncovers the previously ignored role of women in the Korean trade union movement but also challenges the conventional notion that the movement for democratic trade unions began in 1987.’ Korean Studies ’This impeccably researched and expertly written new book will undoubtedly assume its rightful place a

They Are Not Machines: Korean Women Workers and their Fight for Democratic Trade Unionism in the 1970s