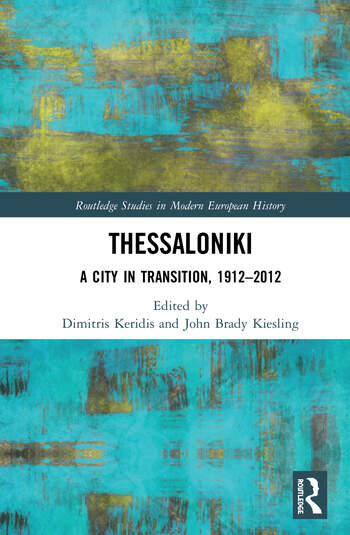 This book shares the conclusions of a remarkable conference marking the centennial of Thessaloniki’s incorporation in the Greek state in 1912. Like its Roman and Byzantine predecessors, Ottoman Salonica was the metropolis of a huge, multi-ethnic Balkan hinterland, a center of modernization/westernization, and the de facto capital of Sephardic Judaism. The powerful attraction it exerted on competing local nationalisms, including the Young Turks, gave it a paradigmatic role in the transition from imperial to national rule in southeastern Europe.

Twenty-three articles cover the multicultural physiognomy of a "Levantine" city. They describe the mechanisms for cultivating national consciousness (including education, journalism, the arts, archaeology, and urban planning), the relationship between national identity, religious identity, and an evolving socialist labor movement, anti-Semitism, and the practical issues of governing and assimilating diverse non-Greek populations after Greece’s military victory in 1912. Analysis of this transformation extends chronologically through the arrival of Greek refugees from Turkey and the Black Sea in 1923, the Holocaust, the Greek civil war, and the new waves of migration after 1990. These processes are analyzed on multiple levels, including civil administration, land use planning, and the treatment of Thessaloniki’s historic monuments.

This work underscores the importance of cities and their local histories in shaping the key national narratives that drove development in southeastern Europe. Those lessons are highly relevant today, as Europe reacts to renewed migratory pressures and the rise of new nationalist movements, and draws lessons, valid or otherwise, from the nation-building experiments of the previous century.

1. Towards a History of Thessaloniki’s Future  Mark Mazower

2. Thessaloniki and the Cities of the Enlightenment  Paschalis M. Kitromilides

4. The Place of Thessaloniki In Greek National Awareness: From Greek Independence to 1912 and beyond  Spyridon Ploumidis

6. The Municipality of Salonica between Old Regime, Ottoman Reforms and the Transition from Empire To Nation State  Nora Lafi

9. Urban Transformation and the Revolution: Salonica and the Young Turks, 1908–1912  Sotiris Dimitriadis

Part 2: A City in Transition

11. The Boundaries of Hellenism: Language and Loyalty Among Salonican Jewry, 1917–1933  Devin E. Naar

12. In the Aftermath of the Balkan Wars: The Incorporation of Thessaloniki in the Greek State  Elpida Vogli

13. Refugee Resettlement 1922–24. A Watershed in the Ethnic, Social and Economic Transformation of Thessaloniki  Constantinos Katerinopoulos

14. Integration through the Past: Jewish Scholars Write History in Inter-War Salonica  Eyal Ginio

16. From the Call Of the Muezzin To the Silence of the Museum: Salonica Soundscapes in Transition  Eleni Kallimopoulou, Kostis Kornetis, and Panagiotis C. Poulos

Part 3: Mapping the Future of Thessaloniki

17. The Muslims of Thessaloniki (1912–2012): A Discontinuous and Uncomfortable Presence  Konstantinos Tsitselikis

18.Urban Change and the Persistence of Memory in Modern Thessaloniki  Eleni Bastéa and Vilma Hastaoglou-Martinidis

20. The Post-War Transformation of the Thessaloniki Periphery: Urbanization and Landscape  Charis Christodoulou

21. Land Policy in Thessaloniki and the Transition to a Contemporary Metropolitan Area, 1922–1967  Athena Yiannakou

22. The Care of Monuments in Modern Thessaloniki: Perceptions and Practices  Kornilia Trakosopoulou-Tzimou

23. A Past for Every Possible Future: Concluding Remarks  Basil C. Gounaris

Dimitris Keridis is Professor of International Relations at the Panteion University in Athens, and since 2019 a member of the Greek Parliament. He has written widely on foreign policy, particularly on the Balkans and on modern Greek history.