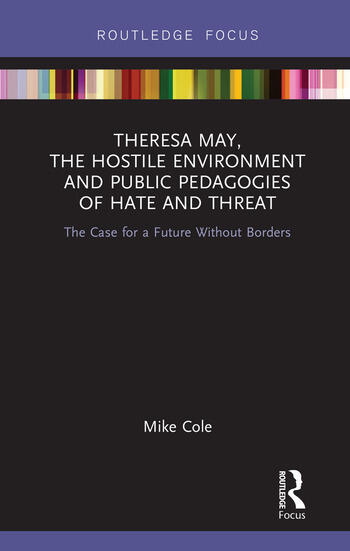 Theresa May, The Hostile Environment and Public Pedagogies of Hate and Threat: The Case for a Future Without Borders

Theresa May, The Hostile Environment and Public Pedagogies of Hate and Threat analyses Theresa May’s involvement in the creation and promotion of public pedagogies of hate and threat around the issue of immigration, which are used to instil fear, stress and anxiety among large sections of the population.

This book uses public pedagogy as a theoretical lens and examines the economic and political backdrop to the hostile environment, before moving on to a consideration of its creation and consolidation by Theresa May as Home Secretary and later as Prime Minister. The effects of the hostile environment on health and education are addressed, as well as its specific impacts on asylum seekers and women. The book also interrogates the Windrush scandal and divided families, as well as the author and his family's personal experiences of the hostile environment. It concludes by considering the escalation of racism in general, the crisis in neoliberalism, and the case for a socialist future without borders.

This topical book will appeal to doctoral, postgraduate and advanced undergraduate students in the fields of education studies, pedagogy and sociology as well as those interested in UK politics.

1.Immigration and the hostile environment: backdrop, creation and consolidation.

2. May ups the ante and becomes Prime Minister.

4.The Windrush scandal, divided families and the Tory assault on family life.

5. The escalation of racism, the crisis in neoliberalism, and public pedagogy for a borderless socialist future.

Mike Cole is Professor in Education in The International Centre for Public Pedagogy, College of Professional Services at the University of East London, UK. He is the author of Trump, the Alt-Right and Public Pedagogies of Hate and for Fascism: What Is To Be Done? (Routledge, 2019).

Theresa May, The Hostile Environment and Public Pedagogies of Hate and Threat: The Case for a Future Without Borders