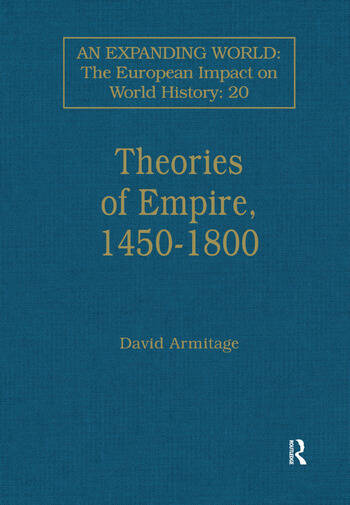 Theories of Empire, 1450-1800 draws upon published and unpublished work by leading scholars in the history of European expansion and the history of political thought. It covers the whole span of imperial theories from ancient Rome to the American founding, and includes a series of essays which address the theoretical underpinnings of the Spanish, Portuguese, French, British and Dutch empires in both the Americas and in Asia. The volume is unprecedented in its attention to the wider intellectual contexts within which those empires were situated - particularly the discourses of universal monarchy, millenarianism, mercantalism, and federalism - and in its mapping of the shift from Roman conceptions of imperium to the modern idea of imperialism.

'this will be a very useful source for students studying the first expansion of Europe.' English Historical Review 'David Armitage has succeeded, where many editors fail miserably...Theories of Empire does rise above the narrow confines of national history and serves as a useful foundation for scholars working in a variety of fields...' Sixteenth Century Journal ’European and Non-European Societies and Christianity and Missions along with the other volumes in An Expanding World should become a standard collection for any academic library. The invaluable bibliography, the variety of themes, and the historical problems will engage students of all levels, undergraduate, graduate, and postdoctoral, in many aspects of early modern and world history for years to come.' Sixteenth Century Journal, Vol. XXX, No. 1 ’Scholars will find much of value in these essays. The authors include leading historians of European expansion; the cover important theories associated with empire, and they discuss the major colonial powers.’ Canadian Journal of History '... offers valuable insight... a worthy contribution to the literature on the colonization of the Americas... a fine addition to one's personal bookshelf.' Journal of World History '... serves as a useful foundation for scholars working in a variety of fields, who seek a more comparative framework for their own research into the questions of empire and imperialism.' Sixteenth Centry Journal, Vol. XXXI