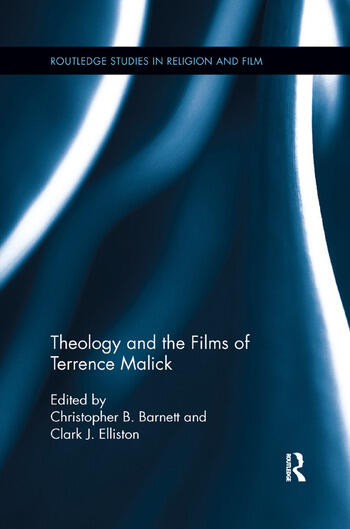 Theology and the Films of Terrence Malick

Terrence Malick is one of the most important and controversial filmmakers of the last few decades. Yet his renown does not stem from box office receipts, but rather from his inimitable cinematic vision that mixes luminous shots of nature, dreamlike voiceovers, and plots centered on enduring existential questions. Although scholars have thoroughly examined Malick’s background in philosophy, they have been slower to respond to his theological concerns.

This volume is the first to focus on the ways in which Malick integrates theological inquiries and motifs into his films. The book begins with an exploration of Malick’s career as a filmmaker and shows how his Heideggerian interests relate to theology. Further essays from established and up-and-coming scholars analyze seven of Malick’s most prominent films – Badlands (1973), Days of Heaven (1978), The Thin Red Line (1998), The New World (2005), The Tree of Life (2011), To the Wonder (2012), and Knight of Cups (2015) – to show how his cinematic techniques point toward and overlap with principles of Christian theology. A thorough study of an iconic filmmaker, this book is an essential resource for students and scholars in the emerging field of religion and film.

Part One: An Introduction to Terrence Malick—Scholar, Filmmaker

1 An Improbable Career: The Films of Terrence Malick

2 In the Theater of Light: Towards a Heideggerian Poetics of Film

3 The Divine Reticence of Terrence Malick

4 Who Has Eyes to See, Let Him See: Terrence Malick as Natural Theologian

5 Gelassenheit: Spirit and Spirituality in the Films of Terrence Malick

7 The Unique Difficulty of Days of Heaven

8 While All Creation Groans: The Thin Red Line and Gestures toward Hope in the Midst of War

9 Light in the Darkness: The Problem of Evil in The Thin Red Line

10 Reaching Towards the Light: Loving the (New) World

11 The Tree of Life and the Lamb of God

12 Eternal Flesh as Divine Wisdom in The Tree of Life

13 The Promise of Love Perfected: Eros and Kenosis in To the Wonder

14 "Remember Who You Are": Imaging Life’s Purpose in Knight of Cups

Christopher B. Barnett is Associate Professor in the Department of Theology & Religious Studies at Villanova University. He received his Doctor of Philosophy in Theology from the University of Oxford. In addition to several articles and book chapters, he has published two books: Kierkegaard, Pietism and Holiness (2011) and From Despair to Faith: The Spirituality of Søren Kierkegaard (2014). His next major project is Kierkegaard: Discourses and Writings on Spirituality—a volume that will appear in The Classics of Western Spirituality series, issued by Paulist Press.

Clark J. Elliston is Assistant Professor of Religion and Philosophy at Schreiner University in Kerrville, Texas. He received his Doctor of Philosophy in Theology from the University of Oxford. His monograph, Bonhoeffer and the Ethical Self (2016), places Dietrich Bonhoeffer in conversation with Emmanuel Levinas and Simone Weil.

Theology and the Films of Terrence Malick