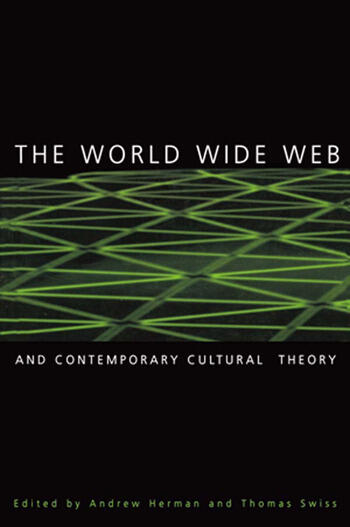 Engaging the thematic issues of the Web as a space where magic, metaphor, and power converge, the chapters cover such subjects as The Web and Corporate Media Systems, Conspiracy Theories and the Web; The Economy of Cyberpromotion, The Bias of the Web, The Web and Issues of Gender, and so on.

Andrew Herman is Associate Professor of Sociology and Cultural Studies at Drake University. He is the author of The "Better Angels" Of Capitalism: Rhetoric, Narrative and Moral Identity Among Men Of The American Upper Class (Westview, 1998) and the forthcoming book, The "Goods "Life: Consumer Culture and Moral Identity in Contemporary America (Blackwell).
Thomas Swiss is Center for the Humanities Professor of English and Director of the Web-Assisted Curriculum at Drake University. He is the author of two collections of poems, including Rough Cut (Illinois UP, 1997). He is editor or co-editor of a number of books, including Key Terms for Popular Music and Culture (Blackwell, 1999). Herman and Swiss, with John H. Sloop, previously co-edited Mapping The Beat: Contemporary Theory And Popular Music (Blackwell, 1998).