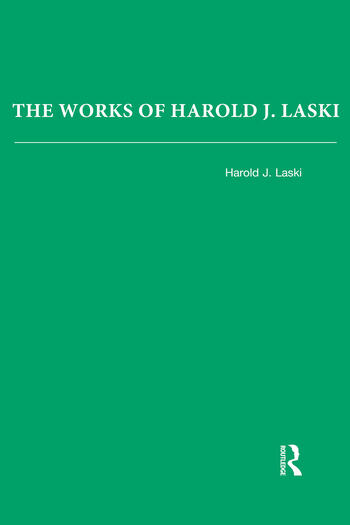 The Works of Harold J. Laski

This set comprises works spanning Laski's career as a political thinker and the volumes re-issued here examine the questions of how government might be made more open and accountable and how the broad-based properity necessary to democracy might be assured. These remain central questions for both established and emerging democracies.

Studies in the Problem of Sovereignty (1917), Authority in the Modern State (1919), and The Foundations of Sovereignty (1921) are all works which expand Laski's pluralist doctrine of the State; a theory then applied in modified form in A Grammar of Politics (1925). Communism (1927) argues against the concept of a Western Communist revolution. Democracy in Crisis (1933) and the more optimistic Reflections on the Constitution (1951) result from the defeat of Labour in 1931 and the onset of the Slump, at which point Laski rejected pluralism in favour of Marxist theory. Reflections on the Revolution of Our Time (1949) predicts a "revolution by consent" arising from the common war-effort. Also included are An Introduction to Politics (1931), The Rise of European Liberalism (1936) Parliamentary Government in England (1938), The Danger of Being a Gentleman (1939), Programme for Victory (1941), The Strategy of Freedom (1942) and The Dilemma of Our Times (1952).

Studies in the Problem of Sovereignty, Authority in the Modern State, The Foundations of Sovereignty, A Grammar of Politics, Communism, Democracy in Crisis, Reflections on the Constitution, Reflections on the Revolution of Our Time, An Introduction to Politics, The Rise of European Liberalism,  Parliamentary Government in England, The Danger of Being a Gentleman, Programme for Victory, The Strategy of Freedom The Dilemma of Our Times, The Communist Manifesto, The American Democracy.

The Works of Harold J. Laski