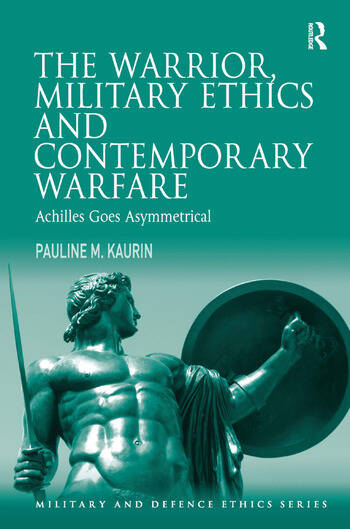 When it comes to thinking about war and warriors, first there was Achilles, and then the rest followed. The choice of the term warrior is an important one for this discussion. While there has been extensive discussion on what counts as military professionalism, that is what makes a soldier, sailor or other military personnel a professional, the warrior archetype (varied for the various roles and service branches) still holds sway in the military self-conception, rooted as it is in the more existential notions of war, honor and meaning. In this volume, Kaurin uses Achilles as a touch stone for discussing the warrior, military ethics and the aspects of contemporary warfare that go by the name of 'asymmetrical war.' The title of the book cuts two ways-Achilles as a warrior archetype to help us think through the moral implications and challenges posed by asymmetrical warfare, but also as an archetype of our adversaries to help us think about asymmetric opponents.

Pauline Kaurin holds a PhD in Philosophy from Temple University, and is a specialist in military ethics, just war theory, philosophy of law and applied ethics. She is Associate Professor of Philosophy at Pacific Lutheran University in Tacoma, WA and teaches courses in military ethics, warfare, business ethics and philosophy of law. Recent publications include: When Less is not More: Expanding the Combatant/Non-Combatant Distinction and With Fear and Trembling: A Qualified Defense of Non-Lethal Weapons.

’Pauline M. Kaurin, long known for her compelling and insightful views on military ethics, offers up a treasure trove of intelligent inquiry in The Warrior, Military Ethics and Contemporary Warfare: Achilles Goes Asymmetrical. Her trademark wisdom and wit is on display as she sheds light on some of the most vexing ethical issues of our day. Prescient and timely, it is a tour de force of thoughtful and careful deliberation by a mature mind. The book reflects Kaurin’s many years of teaching, writing, and thinking about the moral conundrums facing modern warfighters. Her insights on the role of such virtues as courage and loyalty for today’s soldiers hold profound significance in our ever changing militaries-forced as they are to adapt to new forms of warfighting and emerging technologies. Kaurin’s book is a must read for anyone interested in thinking deeply about war and those who wage it.’ Bradley Jay Strawser, Oxford University Institute for Ethics, Law and Armed Conflict, UK ’For decades military professionals have grappled with the challenge of how to wage asymmetric war justly and effectively. This volume makes a significant contribution to that task by providing a cohesive and comprehensive look at how the changing character of war and warriors shapes moral decision-making. It is a must read for all who practise or study asymmetric warfare.’ Rebecca Johnson, Marine Corps University, USA 'This is a thorough, honest and imaginative look at military ethics in the context of asymmetric conflict. The author roots the debate in universal concepts of loyalty and courage and draws on field experience ... Recommendations are practical and clearly based on the analysis of challenges faced by both the military and their civilian counterparts. ... This is an important book that it is hoped will be read carefully by both civilian and military actors with influence.' Medicine Conflict and Survival