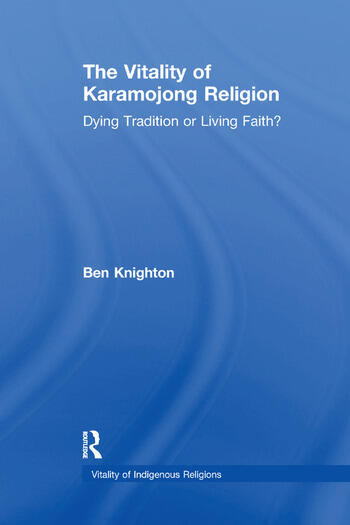 The Vitality of Karamojong Religion: Dying Tradition or Living Faith?

How long can a traditional religion survive the impact of world religions, state hegemony, and globalization? The ’Karamoja problem’ is one that has perplexed colonial and independent governments alike. Now Karamojong notoriety for armed cattle raiding has attracted the attention of the UN and USAID since the proliferation of small arms in the pastoralist belt across Africa from Sudan to stateless Somalia is deemed a threat to world security. The consequences are ethnocidal, but what makes African peoples stand out against state and global governance? The traditional African religion of the Karamojong, despite the multiple external influences of the twentieth century and earlier, has remained at the heart of their culture as it has changed through time. Drawing on oral accounts and the language itself, as well as his extensive experience of living and working in the region, Knighton avoids Western perspectivism to highlight the successful reassertion of African beliefs and values over repeated attempts by interventionists to replace or subvert them. Knighton argues that the religious aspect of Karamojong culture, with its persistent faith dimension, is one of the key factors that have enabled them to maintain their amazing degree of religious, political, and military autonomy in the postmodern world. Using historical and anthropological approaches, the real continuities within the culture and the reasons for mysterious vitality of Karamojong religion are explored.

Contents: Foreword; The challenges of circumscribing the other; The series of human settlements in Karamoja; The colonization of Karamoja and Christian incursion; Spirit and society; Religion and social control; The constitution of the assembly, the paradigm for time; Sacral leaders and sacramental representation; Mediation and revelation; Enduring vitality and its challengers; Bibliography; Index.

'... it is a valuable contribution to the growing literature on pastoralism, conflict, environmental scarcity, and religion. Knighton takes a detailed and earnest look at neglected area and draws on a wealth of ecological data, interviews, secondary data, unpublished local sources, and long-term personal experiences. He emphasizes Karamojong’s strengths and dignity, which is often grossly underestimated even within their own region, and presents some of their weaknesses realistically. The book will be of particular relevance to those interested in peace building and conflict resolution and the role of the church in Karamojong in Northern Uganda. It includes a rich bibliography, which anyone researching the area would do well to use as a starting point.' African Affairs 'This is an important book. I applaud the author's sympathetic, detailed, and critical study of Karamojong religion. This monograph will be very useful for scholars in anthropology, religious studies, history, cultural studies, and mission studies.' International Bulletin of Missionary Research 'The book is the result of over 20 years of involvement with the Karamojong. The book is ambitious, informative, profoundly sympathetic, well written [...], and the linguistic, historical, and anthropological expertise on show is staggeringly impressive... Knighton's familiarity with other scholars, of both Karamojong and related peoples, is remarkably extensive - and his engagement with them just as robust.' Journal of Contemporary Religion 'Knighton has asembled and analysed a vast amount of primary and secondary data from diverse sources; the text is thick with details, references and footnotes. His use of linguistic analysis to derive meanings and sociohistorical relationships is especially rich and compelling... The Vitality of Karamojong Religion is a valuable book for scholars of African religion and East African pastoralists.' African History ’This is an important book. Amongst its other

The Vitality of Karamojong Religion: Dying Tradition or Living Faith?