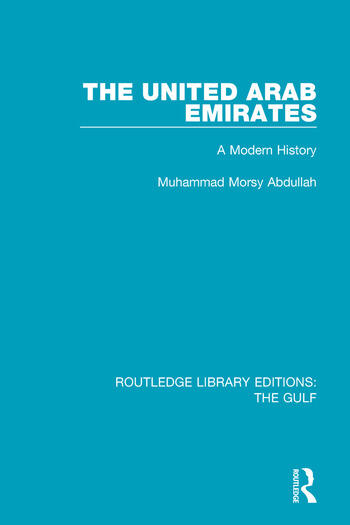 The British withdrawal from the Gulf in 1971 brought to an end the British Imperial era in the history of the Trucial States and marked the birth of the United Arab Emirates. This book, first published in 1978, establishes the political, social, economic and cultural heritage of the UAE and explains the formative issues in the development of the new state. From 1892 to 1971 the history of the Gulf was determined by the British presence. Initially the region was regarded by the British as no more than a part of the strategic defence of India, but by 1945 oil and international air communication had given the region a new strategic importance. This volume examines both the early India Office policy of non-interference in the internal affairs of the region and the circumstances after 1947 which prompted the Foreign Office to interfere in certain internal issues. The second half of the book seeks to explain the development of Arab nationalism, the growth of Iranian activities and the relations of the Trucial States with their Western neighbours, Saudi Arabia and Qatar. The last chapter provides an historical explanation for the present interstate boundaries and political geography of the region.

1. The Trucial States and British Imperial Interests  1.1. British Diplomacy in the Period of International Challenge, 1892-1918  1.2. The Growth of British Interests between the Two World Wars  1.3. The End of the British Imperialistic Era  2. Internal Changes  2.1. Introduction  2.2. The Trucial States between 1891 and 1918  2.3. Changes in the Economy and in Political Attitudes: Cultural Development, 1892-1939  2.4. Important Political Changes during the Inter-War Period  2.5. Decisive and Far-reaching Developments after the Second World War  3. Western Neighbours of the Trucial States  3.1. Geographical Introduction  3.2. The Qatar and Ottoman Dispute over al-‘Udaid, 1871-1913  3.3. The British and Ibn Sa’ud’s Policy towards the Trucial Coast up to 1939  3.4. Negotiations Concerning Abu Dhabi’s Frontiers with Sa’udi Arabia, 1934-8  3.5. The Post-War Period and the Agreement of 1975  3.6. Settlement of the Maritime Boundaries of Abu Dhabi and Qatar  4. Britain, Persia and the Trucial States  4.1. The Qajar Period  4.2. Sirri, Tanb and Abu Musa Islands until 1921  4.3. Britain’s Attitude towards Persian Policy during the Reza Shah’s Reign  4.4. The Search for a Settlement to the Islands’ Dispute after 1945  5. Britain, Muscat and the Inter-State Boundaries  5.1. A Historical Review of the Political Map  5.2. The Frontiers between Muscat and the Trucial States  5.3. The Inter-State Boundaries  6. Conclusion