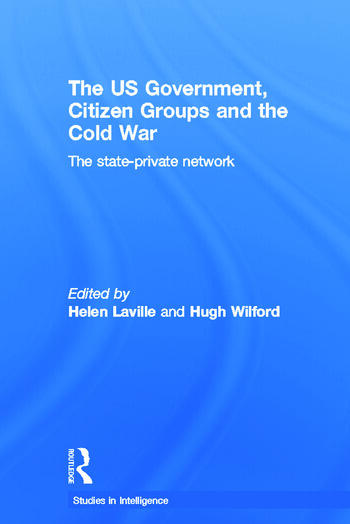 The US Government, Citizen Groups and the Cold War: The State-Private Network

This new book examines the construction, activities and impact of the network of US state and private groups in the Cold War.

By moving beyond state-dominated, ‘top-down’ interpretations of international relations and exploring instead the engagement and mobilization of whole societies and cultures, it presents a radical new approach to the study of propaganda and American foreign policy and redefines the relationship between the state and private groups in the pursuit and projection of American foreign relations.

In a series of valuable case studies, examining relationships between the state and women’s groups, religious bodies, labour, internationalist groups, intellectuals, media and students, this volume explores the construction of a state-private network not only as a practical method of communication and dissemination of information or propaganda, but also as an ideological construction, drawing upon specifically American ideologies of freedom and voluntarism. The case studies also analyze the power-relationship between the state and private groups, assessing the extent to which the state was in control of the relationship, and the extent to which private organizations exerted their independence.

This book will be of great interest to students of Intelligence Studies, Cold War History and IR/security studies in general.

Clark Eichelberger and the Negotiation of Internationalism, Andrew Johnston

The Importance of being (in) Earnest, Helen Laville

Voluntary Associations and the Irony of the

State-Private Network in the Early Cold War From Cooperation to Covert Actions: The United States Government and Students 1940-52, Karen M.Paget

Building a Community around the Pax Americana: The US Government and Exchange Programmes in the 1950s, Giles Scott-Smith

In Search of a Clear and overarching American Policy: The Reporter magazine (1949-1968) and The Cold War, Elke van Cassel

Ambassadors of the Screen: Film and the State-Private Network in Cold War America, Tony Shaw

Section Three: Beyond the Cold War

'The Cultural Cold War in Western Europe is highly recommended for Cold War
scholars. Most of the contributors offer fresh insights into the nature of what is often
now called the “state-private networks” operating on various levels during the Cold
War. Most of the essays are tightly argued, using primary sources culled from American and European archives. The contributors are rightly unwilling to take official claims of infuence at face value. Thankfully, they eschew the esoteric jargon that all too frequently bedevils cultural studies.'

'This is an excellent, and an excellently conceived and edited, essay collection.' - Cambridge Journal

The US Government, Citizen Groups and the Cold War: The State-Private Network