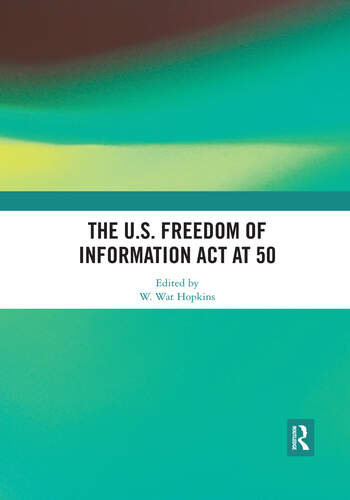 The U.S. Freedom of Information Act at 50

The federal Freedom of Information Act (FOIA), which recently turned 50, has been hailed as the primary means by which US citizens can know about how their governors operate in a democratic republic. Recently, however, it has been criticized as ineffective because it is cumbersome and full of loopholes. This book examines the role and effectiveness of the FOIA, comparing the FOIA world with the pre-FOIA world, rating its effectiveness compared to other access laws internationally, examining ways in which it can be improved, and questioning whether it should be dismantled and replaced.

This book was originally published as a special issue of Communication Law and Policy.

2. The Fiftieth Anniversary of The Freedom of Information Act: How it Measures up Against International Standards and Other Laws Toby Mendel

3. The News Media and the FOIA Derigan Silver

5. Controlling Disclosure, Foreclosing Recourse: The Creep of the Glomar Response A. Jay Wagner

W. Wat Hopkins is a Professor of Communication at Virginia Tech University, USA. He teaches and writes about free speech, is the editor of a textbook on communication law, and is editor of the scholarly journal Communication Law and Policy.

The U.S. Freedom of Information Act at 50