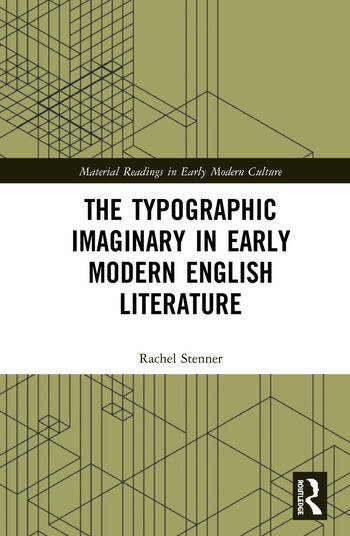 The typographic imaginary is an aesthetic linking authors from William Caxton to Alexander Pope, this study centrally contends. Early modern English literature engages imaginatively with printing and this book both characterizes that engagement and proposes the typographic imaginary as a framework for its analysis. Certain texts, Rachel Stenner states, describe the people, places, concerns, and processes of printing in ways that, over time, generate their own figurative authority. The typographic imaginary is posited as a literary phenomenon shared by different writers, a wider cultural understanding of printing, and a critical concept for unpicking the particular imaginative otherness that printing introduced to literature. Authors use the typographic imaginary to interrogate their place in an evolving media environment, to assess the value of the printed text, and to analyse the roles of other text-producing agents. This book treats a broad array of authors and forms: printers’ manuals; William Caxton’s paratexts; the pamphlet dialogues of Robert Copland and Ned Ward; poetic miscellanies; the prose fictions of William Baldwin, George Gascoigne, and Thomas Nashe; the poetry and prose of Edmund Spenser; writings by John Taylor and Alexander Pope. At its broadest, this study contributes to an understanding of how technology changes cultures. Located at the crossroads between literary, material, and book historical research, the particular intervention that this work makes is threefold. In describing the typographic imaginary, it proposes a new framework for analysis of print culture. It aims to focus critical engagement on symbolic representations of material forms. Finally, it describes a lineage of late medieval and early modern authors, stretching from the mid-fifteenth to the mid-eighteenth centuries, that are linked by their engagement of a particular aesthetic.

Introduction: Print and the Difference it Makes

Life in Literature, Diplomacy, and Commerce 88

Reorganising Continuity: Mirrour of the World 104

Printer-Author Dialogue and its Mutations 126

Characterising the Printer: Gatekeepers of the Press 130

Print and Metacommunication: Uses of the Dialogue Form 145

Chapter 7 St Paul’s Churchyard and the Meanings of Print: Pierce Penilesse His Supplication to the Divell

Nashe’s Mosaic of the Print Trade 266

The Figurative Authority of Print 280

Rachel Stenner lectures in Renaissance Literature at the University of Sheffield, UK.