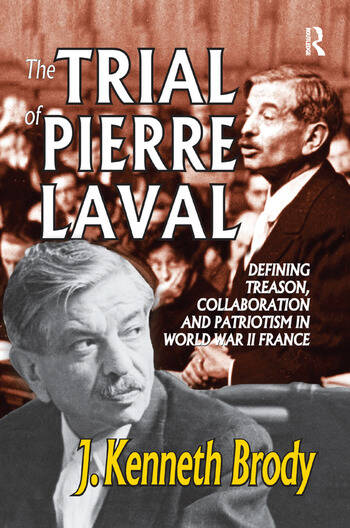 In a stunning work combining historical memory, legal ambiguity, and profound issues of justice, J. Kenneth Brody provides a picture of France in World War II that continues to haunt the present. Architect in 1940 of Marshal Petain's Vichy French regime and its prime minister from April 1942 to August 1944, at war's end Pierre Laval was promptly arrested on charges of treason. This book tells the story of his trial. Did he betray France, or did he serve France under terrible circumstances? What was the truth of "collaboration"? This book considers the pretrial proceedings, or lack thereof, the evidence, and the arguments of the prosecution, as well as Laval's vigorous defense in the early days of the trial.

Because of irregularities in the preliminary proceedings, Laval's defense counsel declined from the outset to participate in the trial. For those reasons and because of the prejudicial conduct of the prosecution, on the third day of the trial, Pierre Laval also declined to participate further. What his defense might have been in a normal pre-trial proceeding and in a fair trial are matters of conjecture. What remains clear is that political trials are a unique form of law and moral judgment.

Trials and history share a common goal-the truth. Trial, judgment, and appeal are intended to produce finality. History, on the other hand, is never final. After its performance in the trial of Pierre Laval, the government of France continued its policy of concealment, even though the truth could no longer determine the outcome of the trial. Slowly, by persistence, courage, and loyalty, history's claims to truth were established. This book presents the defense that might have been presented and then relates the final judgment, its grisly execution only eleven days after the trial opened, and its aftermath.