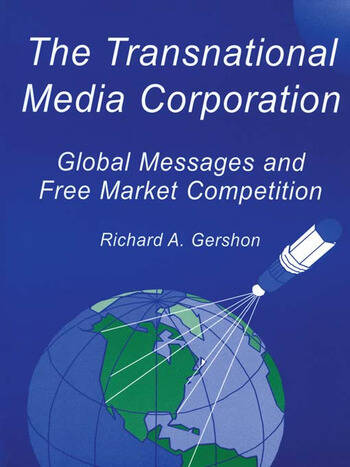 The combination of international privatization trends coupled with advancements in computer and communication technology have transformed the conduct of international business. The result has been a consolidation of players in all aspects of business, including banking, aviation, insurance, and mass media. This book discusses one such player -- the Transnational Media Corporation (TNMC).

Long remembered as a time of rapid growth and expansion for international business, the decades of the '80s and '90s were a period characterized by major mergers and acquisitions. Good examples of this include Time Inc.'s 1989 merger with Warner Communication for $11.2 billion and Walt Disney's 1996 purchase of Cap Cities/ABC for $19.5 billion. According to the late Steven Ross, former co-chief executive officer of Time-Warner, "In order to succeed in business today, you must be in all the major markets of the world." TNMCs have indeed become salient features of today's global economic landscape.

This volume asks the most basic of questions: What makes a global corporation global? And, to what extent do TNMCs affect the marketplace of ideas? This book, then, is intended for the business professional or student who is interested in understanding the business and operations of transnational media.

Part I examines the regulatory and economic reasons prompting the formation of a TNMC. It seeks to explain why such companies engage in direct foreign investment and further considers how transnational operations affect the development of new media products in terms of cost, quality, and availability. The TNMC is unique among global corporations given the fact that its primary business is the creation of information and entertainment products. This book also examines the highly complex relationship between TNMCs and the host nations in which they operate. It further considers such specific issues as cultural trespass, transborder data flow, and the effects of transnational media on the marketplace of ideas.

Part II of this volume provides a series of case study analyses of five leading TNMCs including Time-Warner Inc., Sony Inc., Bertelsmann AG, the Walt Disney Company, and News Corporation Ltd. Specific attention is given to the history, business philosophy, and economic performance of each of these companies.

"...Gershon has written one of the clearest descriptions of today's TNMCs, the major influences on their operations, and their good as well as bad effects around the world."

"Overall, this is an outstanding piece of work. Professor Gershon is to be congratulated on pulling together a tremendous amount of extremely useful and hard to find information. Both experts and novices who are interested in this topic will benefit from this excellent piece of work."
—Michael O. Wirth
University of Denver

"This is an excellent book, scholarly to the extent it needs to be, but at the same time clearly written so that it provides an overall sense for the subject, a feeling if you will for why things are as they are."
—Rod Rightmire
Indiana University