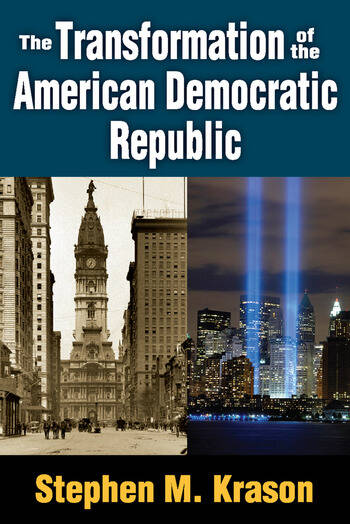 The Transformation of the American Democratic Republic

In this stimulating volume, Stephen M. Krason considers whether the Founding Fathers' vision of the American democratic republic has been transformed and if so, in what ways. He looks to the basic principles of the Founding Fathers, then discusses the changes that resulted from evolving contemporary expectations about government. Referencing philosophical principles and the work of great Western thinkers, Krason then explores a variety of proposals that could forge a foundation for restoration.

Acknowledging that any attempt to revive the Founders' views on a democratic republic must start in the public sphere, Krason focuses on concerned citizens who are aware of the extent to which our current political structures deviate from the Founders' vision and want to take action. Ultimately, a democratic republic can exist, be sustained, and flourish only when there is a deep commitment to it in the minds and norms of its people.

Written by a foremost authority in the field of US Constitutional law, this book will appeal to those interested in American history, society, and politics.

Introduction: The Aim of This Study

Chapter 1 America's "Parchment Regime": The Original Character of the American Democratic Republic and the
Culture Supporting It
Chapter 2 1789-1817: The Formative Years, The Federalist Party Era, and Jeffersonianism
Chapter 3 1817-1840: The Eras of "Good Feelings" and Jacksonian Democracy
Chapter 4 1840-1877: Expansion, Sectionalism, the Civil War, and Reconstruction
Chapter 5 1877-1920: The Gilded Age, the Progressive Era, and World War I
Chapter 6 1920-1945: The "Roaring Twenties," the Great Depression, and World War II
Chapter 7 1945-1960: Post-World War II America and the Cold War
Chapter 8 1960-1980: The Welfare State, Cultural Upheaval, and the Reign and Decline of Liberalism
Chapter 9 1980-Present: The Upsurge of Conservatism, Economic Transformation, and Post-Cold War America
Chapter 10 Analysis and Conclusion: How and Why the American Democratic Republic Has Been Transformed

The Transformation of the American Democratic Republic