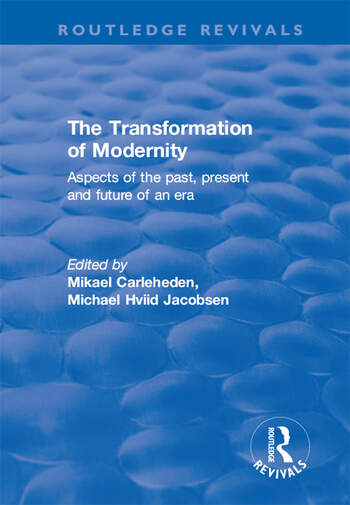 The Transformation of Modernity: Aspects of the Past, Present and Future of an Era

This title was first published in 2001: For over 30 years it has been argued that contemporary society is undergoing a fundamental transformation. The portrait of the modern society or modernity offered by philosophers and social scientists from Hobbes to Parsons is no longer understood as a description of the final and highest stage in the social evolution of mankind. Modern society is not the end of history but simply another more or less contingent social and cultural formation on planet earth. This new perspective on modernity and its transformation, which has emerged from the modernist-postmodernist debate, is the subject matter of this book. It is addressed in a multidisciplinary and international way, both theoretically and empirically, and is explored not only in general and historical terms, but also through specific topics such as sexuality, identity, democracy, globalization, knowledge and leadership. Offering an important collaborative contribution to contemporary discourse in sociology, social psychology, politics and philosophy, this book represents a unique effort to come to grips with our obscure and elusive social position at the start of the 21st century.

The Transformation of Modernity: Aspects of the Past, Present and Future of an Era