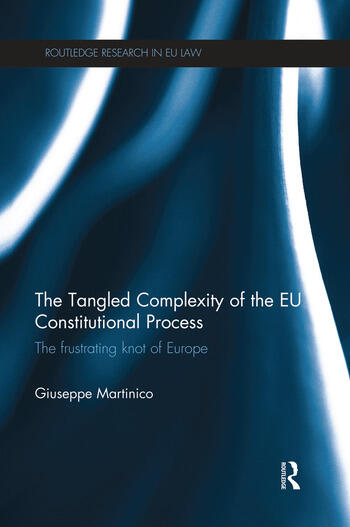 The Tangled Complexity of the EU Constitutional Process: The Frustrating Knot of Europe

Giuseppe Martinico sets out a unique account of EU constitutionalism which argues that the EU legal order is a complex entity which shares some features with natural systems. The book is soundly anchored in the theory and methodology of legal science and based on a deep knowledge of judicial practices. The author contends that Europe is still suffering from the failure of the Constitutional Treaty and is practicing the new institutional equilibrium afforded by the coming into force of the Reform Treaty. The book goes on to explore the methodological implications of such constitutional complexity for the study of EU law. The Tangled Complexity of the EU Constitutional Process will be of particular interest to academics and students in the disciplines of Law, International Relations and Political Science.

1. Only a Drop in the Ocean? An Attempt to Classify the Debate About the Notion and the Nature of the European Constitution  2. Dealing with Constitutional Theories Of European Integration  3. Constructivism and Evolutionism In The Last Twenty Years of (Mega) Constitutional Politics in the EU  4. Complexity in Action: From The Structure to the Actors  5. On The Future of Constitutional Conflicts

Giuseppe Martinico is currently García Pelayo Fellow at the Centro de EstudiosPoliticos y Constitucionales (CEPC), Madrid. Prior to joining the CEPC he was Max Weber Fellow at the European University Institute, Florence. Giuseppe got a PhD in Law from the Scuola Superiore Sant’Anna, Pisa, Italy, where he also conducted two years of post-doctoral research. In Pisa he also serves as STALS Editor (www.stals.sssup.it).

"I appreciate the author’s theoretical framework, which is fortified by numerous examples deriving from national and European case-law. It offers a helpful tool to approach new developments of EU constitutional law, such as the case of Åkerberg Fransson. In fact, a large part of Martinico’s argument is reflected in this case."

"In this book, Dr Martinico presents one of the possible interpretations of the EU constitutional process, going through his very own concept of “constitutional complexity”. He describes the European Union as, “a complex legal order that is an order product of the interaction among constitutional levels/poles which is characterized by some precise features: non-reducibility, non-predictability, non-determinism and non-reversibility” (p.164).This book surprises by the depth of the author’s analysis and the clarity of the arguments, whether or not one agree with his views. In fewer than 200 pages, Martinico’s describes the complex nature of the EU legal order, the main EU constitutional theories and proposes his own thesis"

"Martinico’s contribution is extremely relevant for at least two reasons. The first is that it invites to shed light (in a literal sense) over the hidden dynamics of constitutional conflicts. Enhancing the understanding of what is at stake in constitutional conflicts and unpacking the actors’ behavior within the conflict itself represent an important first step toward the demystification of irenic views of European constitutionalism. This work represents also an invitation to further develop the analysis of these dynamics beyond judicial interactions. Second, the field of constitutional conflicts is far from being exhausted. To the contrary, as the author rightly notes in the last chapters, constitutional conflicts will predictably increase in the future because of four factors: ‘the accession to the European Convention of Human Rights, the enlargement to the East, and the financial crisis and the consequences (one might say, the aftermath) of the roar of the mega-constitutional politics of the season of the Conventions’ (pp. 164-165)’. "

The Tangled Complexity of the EU Constitutional Process: The Frustrating Knot of Europe