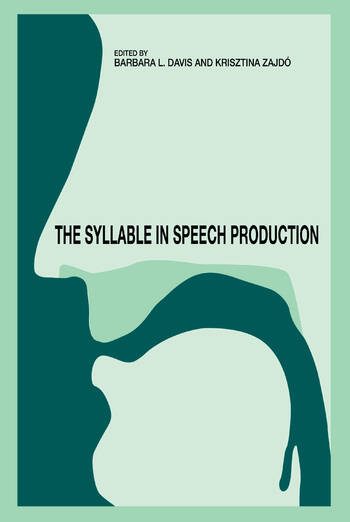 The Syllable in Speech Production: Perspectives on the Frame Content Theory

As a testament to the scope of Peter MacNeilage’s scholarly work across his 40 year career, contributions to this tribute volume represent a broad spectrum of the seminal issues addressed by phonetic and evolutionary science over a number of years. Approaches to the problems raised by attempting to understand these fundamental topics are illustrated in the broad diversity of paradigms represented in the volume. This diversity in itself is a tribute to the breadth of scholarly questions pursued by MacNeilage across his career.

Chapters are arranged around five thematic areas. Two themes, Evolutionary Perspectives on Speech Production and Acquisition of Speech, reflect the major thrust of Peter’s scholarly career over the past 25 years. The other themes are reflective of the broad implications of MacNeilage’s work for scholars in disparate scientific domains. One of the strengths of this volume is the unitary focus of contributions by scientists from diverse scientific backgrounds in considering the applicability of the Frame Content Theory within their own scholarly perspectives. Thematic strands in the volume include:

Dr. Barbara Davis is a Professor in the Department of Communication Sciences and Disorders at The University of Texas at Austin. She has published over 90 articles and book chapters and is the winner of a variety of research and teaching awards. Dr. Davis is interested in emergence of complex serial vocal patterns underlying young children's acquisition of language capacities. She has evaluated these issues in ontogeny, initial stages of vocal acquisition, in typically developing infants and young children in English and diverse language environments. To consider the role of input in acquisition she has also studied emergence of speech production capacities in young infants with varying degrees of hearing loss. Davis has also considered the implications of ontogeny in modern infants for understanding phylogenic origins of vocal system use for communication in early humans.

Dr. Krisztina Zajdo is an Assistant Professor in the Division of Communication Disorders at the University of Wyoming. She has research interests in the areas of phonological development and disorders with a special interest in cross-linguistic paradigms. Her current research projects focus on phonological development in typically developing children in Hungarian. She is presently involved in several international cooperative research projects (with the Universities of Amsterdam and Turku) focused on development of the vowel inventory in monolingual children acquiring Dutch and Finnish. Her most recent publications focus on the acquisition of the vowel inventory in Hungarian-speaking children.

The Syllable in Speech Production: Perspectives on the Frame Content Theory