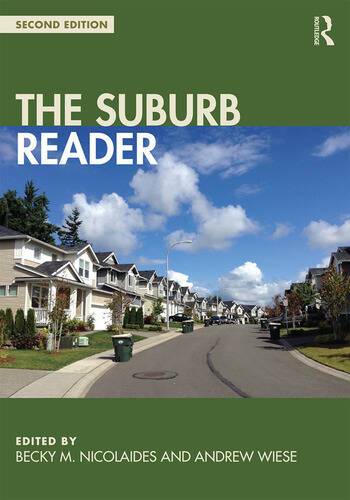 Since the 1920s, the United States has seen a dramatic reversal in living patterns, with a majority of Americans now residing in suburbs. This mass emigration from cities is one of the most fundamental social and geographical transformations in recent US history. Suburbanization has not only produced a distinct physical environment—it has become a major defining force in the construction of twentieth-century American culture.

Employing over 200 primary sources, illustrations, and critical essays, The Suburb Reader documents the rise of North American suburbanization from the 1700s through the present day. Through thematically organized chapters it explores multiple facets of suburbia’s creation and addresses its indelible impact on the shaping of gender and family ideologies, politics, race relations, technology, design, and public policy. Becky Nicolaides’ and Andrew Wiese’s concise commentaries introduce the selections and contextualize the major themes of each chapter. Distinctive in its integration of multiple perspectives on the evolution of the suburban landscape, The Suburb Reader pays particular attention to the long, complex experiences of African Americans, immigrants, and working people in suburbia. Encompassing an impressive breadth of chronology and themes, The Suburb Reader is a landmark collection of the best works on the rise of this modern social phenomenon.

New to the edition

Chapter 1. The Transnational Origins of the Elite Suburb
Chapter 2. Family and Gender in the Making of Suburbia
Chapter 3. Technology and Decentralization
Chapter 4. Economic and Class Diversity on the Early Suburban Fringe
Chapter 5. The Politics of Early Suburbia
Chapter 6. Imagining Suburbia: Visions and Plans from the Turn of the Century
Chapter 7. The Other Suburbanites: class, racial, & ethnic diversity in early suburbia
Chapter 8. The Tools of Exclusion: From Local Initiatives to Federal Policy

Chapter 11.Postwar Suburbs and the Construction of Race
Chapter 12. The City-Suburb Divide

Chapter 13. The Political Culture of Suburbia
Chapter 14. Suburban Transformations Since 1970

Chapter 17. The Future of Suburbia

Becky M. Nicolaides is an Affiliated Research Scholar at the Huntington-USC Institute on California and the West, a Research Affiliate at the UCLA Center for the Study of Women, and the author of My Blue Heaven: Life and Politics in the Working Class Suburbs of Los Angeles, 1920-1965.

Andrew Wiese is Professor of History at San Diego State University and the author of Places of Their Own: African American Suburbanization in the Twentieth Century.