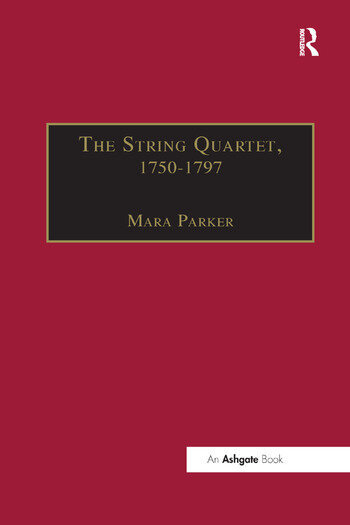 The second half of the eighteenth century witnessed a flourishing of the string quartet, often represented as a smooth and logical progression from first violin-dominated homophony to a more equal conversation between the four voices. Yet this progression was neither as smooth nor as linear as previously thought, as Mara Parker illustrates in her examination of the string quartet during this period. Looking at a wide variety of string quartets by composers such as Pleyel, Distler and Filtz, in addition to Haydn and Mozart, the book proposes a new way of describing the relationships between the four instruments in different works. Broadly speaking, these relationships follow one of four patterns: the 'lecture', the 'polite conversation', the 'debate', and the 'conversation'. In focusing on these musical discourses, it becomes apparent that each work is the product of its composer's stylistic choices, location, intended performers and intended audience. Instead of evolving in a strict and universal sequence, the string quartet in the latter half of the eighteenth century was a complex genre with composers mixing and matching musical discourses as circumstances and their own creative impulses required.

Mara Parker is Assistant Professor of Musicology and String Performance at Widener University in Chester, PA. In addition to her work on the eighteenth-century string quartet, her research interests include chamber music of all types, cello technique and performers, and early nineteenth-century American music. A founding member of the Del Mar String Quartet and the CSU Faculty Trio, she regularly performs in chamber and solo recitals.

’This book provokes a good deal of thought and is full of excellent musical examples... If you are a performer, professional or amateur, this book will be worth investigating.’ The Strad '... a bold attempt to challenge a commonplace of the so-called 'Classical style'...' Early Music '[Mara Parker] has exposed complexities that will repay the further explorations of quartet scholars and performers.' Notes 'Parker's [...] quartet sample - over 650 works by sixty-two composers - is impressive, since the majority of the works under scrutiny are not available in reliable modern editions. She is also to be commended for including lengthy music examples; on several occasions entire quartet movements are reproduced... Her diligence in procuring and transcribing large quantities of hitherto obscure eighteenth-century quartets is laudable...' Eighteenth-Century Music