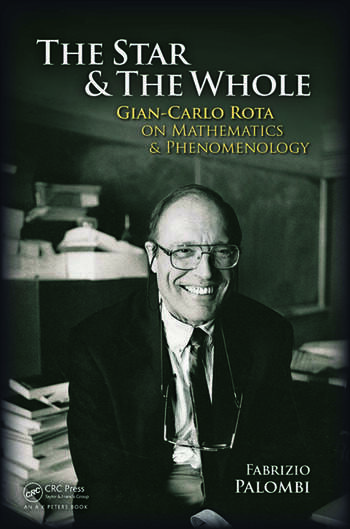 The Star and the Whole: Gian-Carlo Rota on Mathematics and Phenomenology

The Star and the Whole: Gian-Carlo Rota on Mathematics and Phenomenology, authored by Fabrizio Palombi, is the first book to study Rota’s philosophical reflection. Rota (1932–1999) was a leading figure in contemporary mathematics and an outstanding philosopher, inspired by phenomenology, who made fundamental contributions to combinatorial analysis, and trained several generations of mathematicians in his long career at the Massachusetts Institute of Technology (MIT) and the Los Alamos National Laboratory.

The first chapter of the book reconstructs Rota’s cultural biography and examines his philosophical style, his criticisms of analytical philosophy, and his reflection on Heidegger’s thought. The second chapter presents a general picture of Rota’s re-elaboration of phenomenology examined in the light of the Husserlian notion of Fundierung. This chapter also illustrates how the star-shape becomes a powerful instrument for understanding the properties of Husserl’s mereology and the critique of objectivism. The third chapter is a theoretical reflection on the nature of mathematical entities, and the fourth examines the complex relation of mathematical research with technological applicability and scientific progress. The foreword of the text is written by Robert Sokolowski.

A Phenomenological Perspective
The problem of "sense" and the "end of objectivity"
Intentionality and being-in-the-world
Reading and seeing
Fundierung in the Third Logical Investigation
The star, the whole, and the part

Fabrizio Palombi, Professor at the University of Calabria (Italy), was Rota’s collaborator and a Visiting Scholar at MIT. He is the editor of Rota’s philosophical anthologies Pensieri discreti (Garzanti: 1993), Indiscrete Thoughts (Birkhäuser: 1997), and Lezioni Napoletane, (Città del Sole: 1999), and coeditor of the proceedings of an international conference dedicated to Rota, From Combinatorics to Philosophy (Springer: 2009). Palombi is the author of two monographs: Il legame instabile (Franco Angeli: 2002), and Jacques Lacan (Carocci: 2009).

This book is a short overview of Gian-Carlo Rota’s life and his work. … In the current climate in which all research seems to be valued proportionately to its economic impact, the last chapter is of particular interest. Rota has argued that mathematics is threatened by ignorance and hostility towards its practitioners. … The last chapter also includes a complete bibliography of all of Rota’s philosophical writings.
—David J. Hand, International Statistical Review, 80, 2012

The book gives a deep look into the philosophical views of Gian Carlo Rota. … The first chapter starts with a biography of Rota, which is important to know for understanding the development of his philosophical views. … the author gives an elegant explanation of Rota’s openly negative attitude towards analytic philosophy. … the reader learns about the core of Rota’s philosophical studies. … The author explains that Rota followed the course of most classical philosophical thought in his analysis of mathematics and of its relation with objectivism. … [he also] examines the relation of mathematics to technological applicability and scientific progress. …
—Peeler Müürsepp, Mathematical Reviews, 2012e

This admirable book by Fabrizio Palombi is an attempt to ‘figure out’ the life, work, and person of Gian-Carlo Rota. … we are indebted to Fabrizio Palombi for sifting through Rota’s memories and writings to help us understand him and his work.
—From the Foreword by Robert Sokolowski 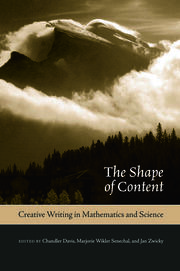 The Shape of Content: Creative Writing in Mathematics and Science 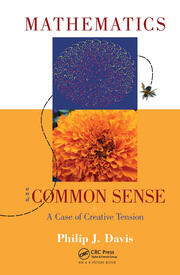 The Star and the Whole: Gian-Carlo Rota on Mathematics and Phenomenology