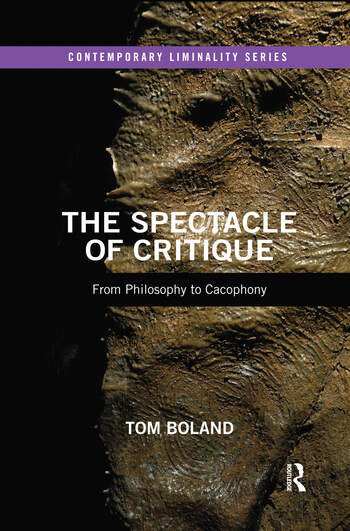 The Spectacle of Critique: From Philosophy to Cacophony

Far from being the preserve of a few elite thinkers, critique increasingly dominates public life in modernity, leading to a cacophony of accusation and denunciation around all political issues. The technique of unmasking ‘power’ or ‘hegemony’ or ‘ideology’ has now been adopted across the political spectrum, where critical discourses are routinely used to suggest that anything and everything is only a ‘construct’ or even a ‘conspiracy’. This book draws on anthropological theory to provide a different perspective on this phenomenon; critique appears as a liminal predicament combining imitative polemical and schismatic urges with a haunting sense of uncertainty. It thereby addresses a central academic concern, with a special focus on political critique in the public sphere and within social media. Combining historical interrogations of the roots of critique, as well as examining contemporary political discourse in relation to populism, as seen in presidential elections, historical commemorations and welfare reform, The Spectacle of Critique uses anthropology and genealogy to offer a new sociology of critique that problematises critique and diagnoses its crisis, cultivating acritical and imaginative ways of thinking.

1. The Tragedy of Critique

2. The sound and the fury: The insights and limits of the critique of critique.

3. The Experience of Critique: Inside Permanent Liminality

4. Critique is History? Understanding a tradition of tradition-breaking

5. Unthinking Critical Thinking: The Reduction of Philosophy to Negative Logic

6. The Cacophony of Critique: Populist Radicals and Hegemonic Dissent

Tom Boland is Lecturer in Sociology at Waterford Institute of Technology, Ireland. His research focuses on critique, literature and unemployment. He is the author of Critique as a Modern Social Phenomenon and co-author of The Sociology of Unemployment.

The Spectacle of Critique: From Philosophy to Cacophony