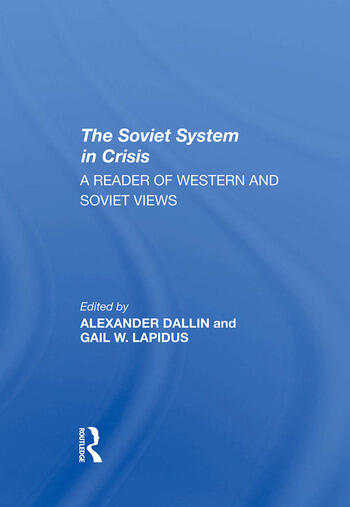 The Soviet System In Crisis: A Reader Of Western And Soviet Views

This reader is intended to fill the urgent need for up-to-date materials on the Gorbachev era and to provide scholars and students with source materials and interpretations not available in standard texts. In addition, the book will be regularly revised and updated to take account of rapidly changing events. Alexander Dallin and Gail Lapidus have brought together outstanding Western analyses, as well as Soviet documents and commentary, dealing with developments in the USSR's politics, economy, society, culture, and foreign policy since 1985. The collection covers the full spectrum of views—skeptical and enthusiastic, ideological and pragmatic—offered by journalists, politicians, observers, and participants. Introductory and concluding material by the editors provides the essential context to help students understand the myriad opinions put forth on the vast changes in the USSR and where its future may lie.

Preface -- Credits -- Introduction -- The Setting: An Introduction -- The Roots of Perestroika -- A Usable Past -- The Communist System -- Domestic and International Factors in the Formation of Gorbachev's Reforms -- Politics Before Gorbachev: De-Stalinization and the Roots of Reform -- The Friends and Foes of Change: Reformism and Conservatism in the Soviet Union -- Letter to the Soviet Leaders, March 19, 1970 -- The Pioneers of Perestroika: Back to the Intellectual Roots of Soviet Reforms -- Reform and the Political and Social System -- A Socialist Pluralism of Opinions: Glasnost and Policy-Making Under Gorbachev -- Political Change in the Soviet Union -- State and Society: Toward the Emergence of Civil Society in the Soviet Union -- Voluntary Associations in Gorbachev's Reform Program -- The Emergence of Russian Multiparty Politics -- The Workers' Movement: A New Stage -- Evaluating Gorbachev as Leader -- The Quality of Gorbachev's Leadership -- Gorbachev's Endgame -- Soviet Political Debates -- Glasnost' and Soviet Culture -- Politics and History Under Gorbachev -- Advances and Debts -- Sources -- Are Our Principles Any Good? -- Speech at the Conference of the Aktiv of the Khabarovsk Territory Party Organization, July 31, 1986 -- Address at the Forty-Third UN General Assembly Session, December 7, 1988 -- Speech to the Russian Federation Congress of People's Deputies, Moscow, May 22, 1990 -- I Cannot Forgo My Principles -- The Tragedy of Centralism -- I Can't Absolve Myself of Guilt -- The Architects of Card Houses -- Democratic Platform Program of the CPSU, Statement of June 1, 1990 -- The Economy -- Is Soviet Socialism Reformable? -- The Soviet Economy on a Treadmill of Perestroika: Gorbachev's First Five Years -- The New Soviet Plan -- Beyond Perestroyka: The Soviet Economy in Crisis -- Nationalism and the Future of the Federal System -- State, Civil Society and Ethnic Cultural Consolidation in the USSR: Roots of the National Question -- Gorbachev's Nationalities Problem -- Dilemmas of Russian Nationalism -- Soviet Jewry in the Age of Perestroika -- The Russian Question: In Search of an Answer (a Roundtable) -- Declarations of the State Sovereignty of the Russian and Ukrainian Republics -- Foreign Policy and National Security -- The Revolution in Soviet Foreign Policy -- East-West: The Problem of Deideologizing Relations -- The Search for New East-West Relations -- New Thinking About World Communism -- Gorbachev and German Unification: Revision of Thinking, Realignment of Power -- The USSR and the Third World in the 1980's -- Soviet National Security Under Gorbachev -- State, Society, and the Military Under Gorbachev -- The Future of the System -- Thinking About the Soviet Future -- To the Stalin Mausoleum -- Managing U.S.-Soviet Relations in the 1990s -- From Points to Pathways of Mutual Advantage: Next Steps in Soviet-American Relations -- Speech to the Congress of People's Deputies, December 20, 1990 -- Speech to the Congress of People's Deputies, December 22, 1990 -- Conclusion

The Soviet System In Crisis: A Reader Of Western And Soviet Views