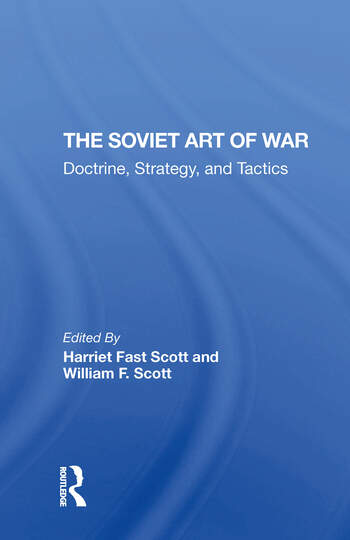 The Soviet Art Of War: Doctrine, Strategy, And Tactics

No other nation has invested as much intellectual capital in the study of war as has the Soviet Union over the last six decades, and the doctrine, strategy, and tactics that have been developed by Soviet theoreticians are bound to guide any future Soviet military action. The Soviet Art of War makes available to Western readers selections from the most significant and influential Soviet military writings from 1917 to the present. The Scotts have examined thousands of Soviet military publications, including the restricted journal of the Soviet General Staff, Voyennaya Mysl', to make this book the most comprehensive account of Soviet military theory and practice yet published. The papers they have chosen thoroughly illustrate the development of the basic features of Soviet military art, from the days of trench warfare to the era of the nuclear battlefield. These documents demonstrate the emphasis on surprise, on deception, on mass deep penetration of enemy defenses, and on a unified strategy for all services. They also show the forms of military action—destruction and attrition, defense and offense, maneuver and position-as seen through the eyes of leading Soviet marshals, generals, and admirals. The usefulness of this material is further enhanced by the Scotts' commentary and their analysis of each group of readings.

"Harriet Fast Scott spent four years in Moscow during her husband's two tours of duty at the U.S. Embassy there. She is now a senior research associate at the Center for Advanced International Affairs, University of Miami, and is a consultant on Soviet military and political affairs to both government and private research organizations. William F. Scott, Colonel, USAF retired, served two tours of duty in the USSR as senior air attachÃ© and as defense and air attachÃ©. Dr. Scott now teaches at Georgetown University, lectures at other universities and colleges, and serves as a consultant. Both Dr. and Mrs. Scott have been defense policy advisers to President Reagan. They own the largest private collection of Soviet military publications in the United States."

The Soviet Art Of War: Doctrine, Strategy, And Tactics