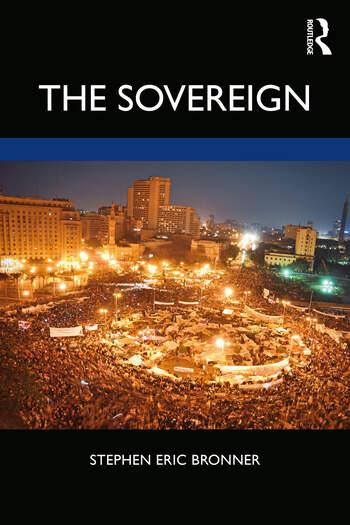 Sovereignty is among the most important phenomena for making sense of political life. But there are many mistaken assumptions associated with the concept. This book provides a new and somewhat unorthodox interpretation of it from the standpoint of a theory of practice.

responds to pressing political issues of our time, like immigration and refugees, transnationalism and populism, the prospects for democracy, and the relationship between civil society and the state. The chapters trace the concept of sovereignty from its origins in political theory, providing perspective and insights that leave the reader with a phenomenological sketch of the sovereign. Bronner transforms our ideas about political power, what it is, how it has been used and how can be used. His new theory of sovereignty concludes with twenty-five provocative theses on the sovereign’s role in modern capitalist society.

is a novel and unparalleled overview of a crucial concept by an influential thinker. It is especially and particularly recommended to scholars and student of comparative politics, international relations, contemporary political theory, and the wider general public.

Stephen Eric Bronner is Board of Governors Professor Emeritus of Political Science at Rutgers University. Co-Director of the International Council for Diplomacy and Dialogue, Director of Global Relations at the Center for the Study of Genocide and Human Rights at Rutgers, he has taken part in missions of civic diplomacy in Darfur, Iran, Iraq, Syria, Sudan, and elsewhere. Professor Bronner’s writings have been translated into more than a dozen languages, and he has been the recipient of many awards, including the 2011 MEPeace Prize from the Middle East Political Network based in Jerusalem.

"Stephen Bronner has been an important critical voice on the American political scene for the past few decades. Here, in his book Sovereignty, Bronner provides an original and provocative set of views on this urgent topic – especially topical owing to its clear focus on such pressing issues as immigration, refugees, populism, transnational power, and the fate of democracy not only in the United States but around the world. As usual, Bronner presents his work in a style accessible to both an academic and general readership. The book is highly recommended for anyone interested in the special challenges facing contemporary American politics." — Carl Boggs, Professor of Social Sciences, National University, author of Fascism Old and New and Origins of the Warfare State.

"In a time of democratic deficit and the emergence of a new authoritarian populism, Bronner has written a timely book about the nature of political power that can help us find clarity and critical judgment. He provides us with an incisive political critique of the reactionary forms of power and authority that are on the rise while at the same time pointing us toward a cosmopolitan, democratic alternative that can inspire social transformation and offer principles for a more democratic politics yet to be realized." — Michael J. Thompson, William Paterson University

"In his latest book, political theorist Stephen Bronner problemtizes the traditional assumptions of ‘sovereignty’ as unable to stand up to the challenges of our time. In doing so, Bronner posits the idea of ‘cosmopolitan sovereignty’ as an intellectual exercise in envisioning the traditional boundaries of power, state sovereignty and democracy to account for the recent socio-political trends with a particular focus on hate, bigotry, and identity politics. This is a critical work that addresses some of the vital questions that plague our time, which will benefit students and anyone curious about these trends and how they can be overcome." — Dalia F Fahmy, Associate Professor, Department of Political Science, Long Island University-Brooklyn