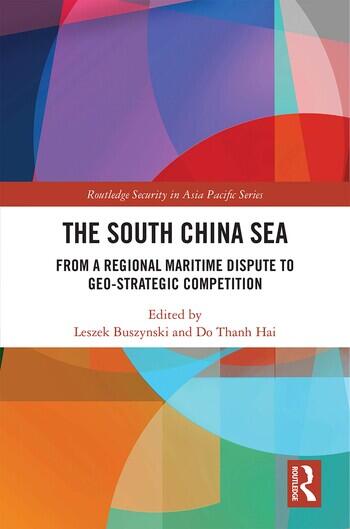 The South China Sea: From a Regional Maritime Dispute to Geo-Strategic Competition

This book explores the very latest developments in the South China Sea maritime dispute. It examines the South China Sea as an arena for geostrategic competition between China and the United States and why the dispute is so important for regional and global geopolitics. It outlines the most recent developments in the sea itself and assesses the role of the Association of Southeast Asian Nations (ASEAN) and the current views of the contesting claimants. It considers the position of countries from outside the region, India as well as Japan; surveys military and naval developments; and examines confidence building, preventive diplomacy, and dispute resolution measures. The book concludes by highlighting the points of greatest risk and by discussing how the situation is likely to develop going forward.

Leszek Buszynski is an honorary professor - with the Strategic and Defence Studies Centre at the Australian National University, Canberra, Australia. From 1997 to 2010, he was Professor of International Relations in the Graduate School of International Relations at the International University of Japan. He has published widely on Asia-Pacific security issues and is co-editor of the Routledge series on Asia-Pacific Security. His most recent publications include: The Geopolitics of the Western Pacific: China, Japan and the United States, Routledge 2019, and the edited book The South China Sea Maritime Dispute: Political, legal and Regional Perspectives, Routledge 2014.

Do Thanh Hai is Senior Fellow and Assistant Director-General of the Bien Dong Institute for Maritime Studies at the Diplomatic Academy of Vietnam (DAV). He obtained his doctorate from the Australian National University and his master’s degree from Erasmus Mundus Global Studies Program. His previous positions include vacation scholar at the University of New South Wales at the Australian Defence Force Academy in Canberra and Deputy Director of the Centre for Political and Security Studies of the DAV’s Institute for Foreign Policy and Strategic Studies in Hanoi. He is the author of the book Vietnam and the South China Sea: Politics, Security and Legality published by Routledge in 2017. He has published articles in The Pacific Review, The ASAN Forum, CSIS PacNet, Journal of International Review (DAV), and a number of news outlets.

The South China Sea: From a Regional Maritime Dispute to Geo-Strategic Competition