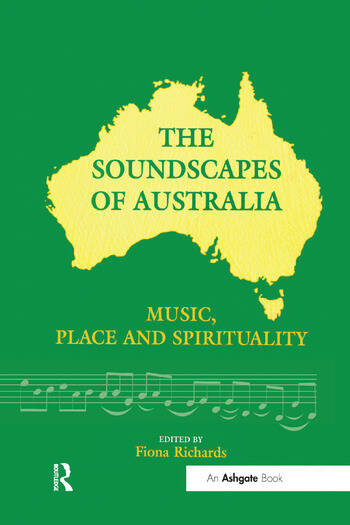 The Soundscapes of Australia: Music, Place and Spirituality

Australia offers tremendous scope for understanding the relationship between music, spirituality and landscape. This major, generously-illustrated new volume examines, in fifteen chapters, some of the ways in which composers and performers have attempted to convey a sense of the Australian landscape through musical means. The book embraces the different approaches of ethnomusicology, gender studies, musical analysis, performance studies and cultural history. Ranging across the country, from remote parts of the Northern Territory to the bustling east coast cities, from Tasmanian wilderness to tropical Queensland, the book includes references to art and literature as well as music. Issues of national identity, belonging and aboriginalization are an integral part of the book, with indigenous responses to place examined alongside music from the western orchestral, chamber and choral repertories. The book provides valuable insight into a wide range of music inspired by Australia, from the Yanyuwa people to Jewish communities in Victoria; from Peter Sculthorpe's opera Quiros to the work of European expats living in Australia before the Second World War; from historic Ealing film scores to contemporary sound installations. The work of many significant composers is discussed in detail, among them Ross Edwards, Barry Conyngham, David Lumsdaine, Anne Boyd and Fritz Hart. Throughout the book there is a sense of the vibrancy and diversity of the music inspired by the sights and sounds of the Australian landscape.

Fiona Richards is Head of the Music Department at The Open University, UK.

’This ultimately is a volume about place, and the musical sensibilities used by some groups to construct, re-imagine, celebrate, honour and remember place. This is an important focus. Interpreted more broadly, it allows us to begin to explore our relationship to the transcendent, to the mystic, to history, to our gender, and to our own personal inclinations. This is an important enterprise and in that this book assists it, it merits attention.’ Australian Journal of Indigenous Education 'Of particular note is the contribution that the book makes to discussion about cross-cultural appropriation, particularly representations of Australian Aboriginal materials by Australian composers of European descent (a discussion that has been lacking until recent times). ...[T]he juxtaposition of contrastive disciplinary and ideological viewpoints and subject matter serves to engage the reader in a better appreciation of the differences between ways of relating to place through music and spirituality in different cultural, historical, and social contexts.' The World of Music

The Soundscapes of Australia: Music, Place and Spirituality