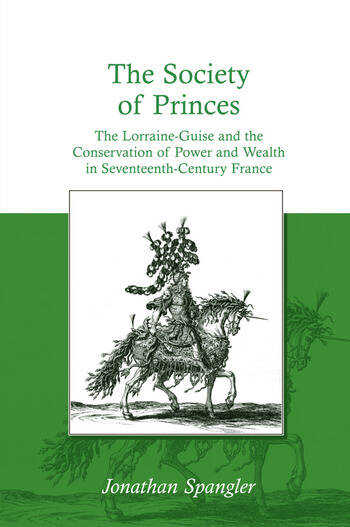 The Society of Princes: The Lorraine-Guise and the Conservation of Power and Wealth in Seventeenth-Century France

The princes étrangers, or the foreign princes, were an influential group of courtiers in early modern France, who maintained their unofficial status as 'foreigners' due to membership in sovereign ruling families. Arguably the most influential of these were the princes of Lorraine, a sovereign state on France's eastern border. During the sixteenth century the Lorraine-Guise dominated the culture and politics of France, gaining a reputation as a powerful, manipulative family at the head of the Catholic League in the Wars of Religion and with close relationships with successive Valois monarchs and Catherine de Medici. After the traumas of 1588, however, although they faded from the narrative history of France, they nevertheless remained at the pinnacle of political culture until the end of the eighteenth century. This book examines the lesser-known period for the Guise at the later stages of the ancien régime, focusing on the recovery of lost fortunes, prestige, favour and influence that began towards the end of the reign of Louis XIII and continued through that of Louis XIV. Central to the work is the question of what it meant to be a member of a family of princely rank whose dynastic links outside the state guaranteed privileges and favours at the highest level. Jonathan Spangler investigates how an aristocratic family operated within that political culture, including facets of patronage (political, ecclesiastical, military, and the arts) and the meaning of dynasticism itself (marriages, testaments, women's roles, multiplicity of loyalties). The result is a thorough examination of the nature of crown-noble relations in the era of absolutism as seen through the example of the Lorraine-Guise. It sheds light on how the family which had so threatened the equilibrium of the late Valois monarchy became one of the strongest pillars supporting the regime of the later Bourbons.

Contents: Introduction; Introducing the foreign princes; The Lorraine-Guise dynastic identity: history, image, property and display; At court: Lorraines and royal favour; The corporate merger: marriage alliances, contracts and widowhood; Lorraines in the courts: successions and the French judiciary; Being everywhere ... in the South: provincial interests in the Vivarais; Lorraines on the borders and in the service of foreign monarchs; Conclusion; Appendices; Bibliography; Index.

Jonathan Spangler is Lecturer in History in the Department of History and Economic History at the Manchester Metropolitan University, UK.

'The Society of Princes gives dynastic history a new lease on life. It demonstrates that individuals in the various constituent lineages of one dynasty of princes étrangers continued through the seventeenth century to look beyond the interests of their immediate families to those of their broad, transnational kinship group as a whole. It restores the princes étrangers (French aristocrats whose titles originated outside the kingdom) to their place alongside the better-known princes du sang and princes légitimés, revealing how semi-sovereign princes with landholdings and alliances in virtually every corner of France and beyond its borders facilitated the Bourbons' own state-building and geographical expansion. Jonathan Spangler's archival expertise yields an unprecedented picture of the intricate ties of blood (including the "matriclan" of bonds between and through women), patronage, marriage patterns, dowager strategies, and manipulations of the law that the men and, significantly, the women of this family parlayed into dynastic success.' Carolyn Lougee Chappell, Stanford University, USA ’Spangler’s work is both original in its aims and highlights important facts surrounding noble dynasties of the early modern period. ... While Spangler’s book is an important work on a powerful family group, it is hoped by this reviewer that it will not only reshape the way we view the dynastic histories of the grandees, but that it will also stimulate similar dynastic studies of lower ranked families. French History 'This monograph will take its place as an important contribution to our understanding of the French - and indeed European - nobility in the early modern period.' Seventeenth Century News

The Society of Princes: The Lorraine-Guise and the Conservation of Power and Wealth in Seventeenth-Century France